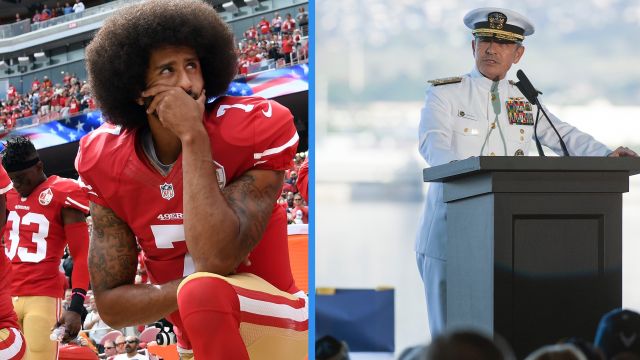 SMS
Pearl Harbor Ceremony Includes A Jab At Kaepernick
By Matt Picht
By Matt Picht
December 8, 2016
Admiral Harry B. Harris JR. pointed out the veterans of Pearl Harbor "never failed to stand for the national anthem being played."
SHOW TRANSCRIPT

The U.S. military marked the 75th anniversary of the attack on Pearl Harbor in a somber, respectful and mostly apolitical manner. Mostly.

"You can bet that the men and women that we honor today and those who died that fateful morning 75 years ago never took a knee and never failed to stand for the national anthem being played," U.S. Pacific Command commander Adm. Harry B. Harris Jr. told the crowd.

SEE MORE: A Rare Look At This Sunken Seaplane Downed In Pearl Harbor

Harris received a standing ovation for what appeared to be a dig at 49ers quarterback Colin Kaepernick.

For months, Kaepernick and a handful of other athletes have protested U.S. police brutality by kneeling or sitting down during the national anthem.

Harris' comments were initially tweeted out by the U.S. Department of Defense before being taken down. A Pentagon representative told The Washington Post, "We deleted the tweet because we decided we didn't want to weigh in on something that could be construed as political."

Back in August, Kaepernick told ESPN his protests weren't directed at the military, saying, "I have great respect for the men and women that have fought for this country."