The Argument For Changing 'Veterans Day' Back to 'Armistice Day' 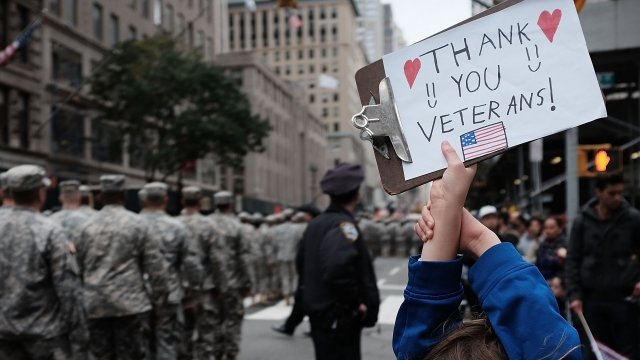 SMS
The Argument For Changing 'Veterans Day' Back to 'Armistice Day'
By Ben Schamisso
By Ben Schamisso
November 7, 2018
Veterans For Peace and other anti-war groups want Americans to remember that the holiday was originally meant to celebrate peace, not militarism.
SHOW TRANSCRIPT

Veterans Day is celebrated in the U.S. every year on November 11. That's because World War I effectively ended on that day 100 years ago with the signing of an armistice calling for a ceasefire.

November 11 is known as "Armistice Day" in many European countries. And that's also what the U.S. called the holiday until 1954. But in the aftermath of World War II and the Korean War, Congress dropped "Armistice Day" and adopted "Veterans Day" instead to honor all American veterans.

Even if that name swap happened more than 60 years ago, some critics are still unhappy about it. One particular group that wants to "reclaim Armistice Day" is Veterans For Peace.

The non-profit wants Americans to remember that the holiday was originally meant to celebrate peace and not militarism. In order to do that, Veterans For Peace is organizing events and vigils around the country to encourage attendees to question the meaning of Veterans Day.

"So giving people an opportunity to reflect and to remember, and hopefully come away with a deeper appreciation about the service of veterans and the deeper meaning of what it means to serve in a war and hopefully to not repeat those mistakes," explained Veterans For Peace member, Joshua Shurley.

Veterans For Peace member Joshua Shurley served in the U.S. army in the '90s. Later in life, he got a PhD studying the effects of U.S. military interventions in Africa — and his views on the U.S. military dramatically changed.

"It was that experience, talking to civilians, talking to people affected by supported interventions, that really got me seeing what our militarism looks like on the other side; what it looks like for the people who are experiencing it. Because it looks a lot different from their point of view," Shurley said.

Shurley added: "We dropped honoring and commemorating the sacrifice of all civilians, and of all people affected by war. And so now, we're just focusing on the veterans. And we're focusing on displays of militarism, on parades, on flag-waving. And that seems a little shallow and frankly, a little cheap. And I think we can do better than that."

"What would you say to those who claim that trying to change the traditions of Veterans Day would be unpatriotic?" asked Newsy's Ben Schamisso.

"Dissent is the highest form of patriotism. And so if we are not — as citizens — holding our government accountable and asking tough questions, we're not really honoring our military when we're sending them off to fight in meaningless wars," Shurley said.