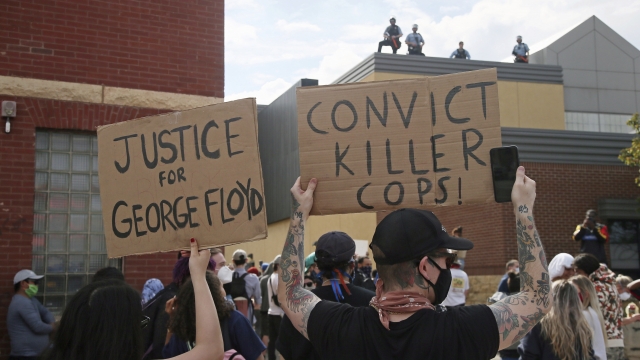 After days of protest in Minnesota, the chorus calling former Officer Derek Chauvin's arrest includes law enforcement from all over the country.

After a night of protests turned violent, a growing chorus of people are calling for the arrest of the four police officers involved in George Floyd's death.

"Do you think that was murder?" a CBS reporter asked.

"You do?" the reporter asked.

"I’m not a prosecutor, but let me be clear: The arresting officer killed someone," Frey said.

Floyd died Monday after Minneapolis police officer Derek Chauvin pinned him to the ground and held his knee on Floyd's neck for more than seven minutes. Floyd repeatedly said, "I can't breathe." The incident report from the Minneapolis Fire Department notes he was "unresponsive" and "pulseless" in the ambulance. First responders and hospital staff tried to revive him for almost an hour before declaring him dead.

Law enforcement officials across the country are condemning the actions of the four officers involved. Harris County, Texas, Sheriff Ed Gonzalez said, "No police protocols recommend kneeling on a human being's neck until he passes out." And Orange County, Florida, Sheriff John Mina described the arrest as "Inexcusable, indefensible, and in my opinion unlawful." Chatanooga's police chief tweeted, "If you wear a badge and don't have an issue with this, turn it in."

"It's not one of those instances where we would say, 'Let's give the officer the benefit of the doubt,'" said Brunson.

Rod Brunson has worked with police departments in Boston, Chicago and other major cities around the country to mend police and community relations.

The Minneapolis Police Department fired the four officers involved the day after Floyd's death. That's a marked departure from the case of Eric Garner, who died after a New York City police officer used an illegal chokehold on him in July 2014. Daniel Pantaleo, the officer involved in Garner's death, wasn't fired until August 2019.

On the ground in Minneapolis, officials are asking for calm after Wednesday night's violence. Angry crowds set dozens of fires and looted stores, leaving miles of destruction in their wake.

"You have every absolute right to be angry, to be upset, to be mad, to express your anger. However, you have no right to perpetrate violence and harm on the very communities that you say that you are standing up for," said Minneapolis City Council Vice President Andrea Jenkins.

The Minnesota Bureau of Criminal Apprehension is investigating Floyd's death, and a decision on any criminal charges will be made by the Hennepin County Attorney's Office.