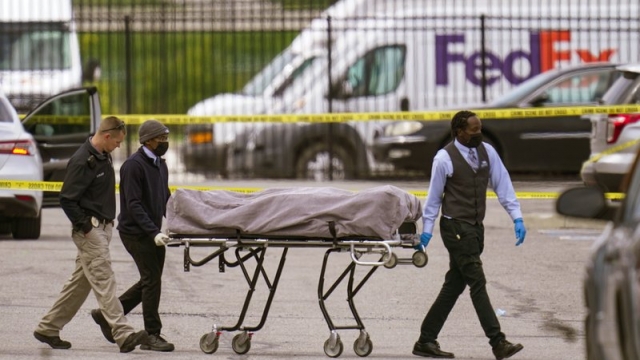 The White House Is Urging Congress To Act On Gun Reform After Non-stop Bloodshed From Mass Shootings.

A familiar and deadly problem has returned across the United States with a vengeance. What happened in Indianapolis Thursday was only the latest in a string of gun violence incidents. They’ve grabbed headlines over the past month, alongside the continuing COVID-19 pandemic.

Vice President Kamala Harris said: "Yet again, we have families in our country that are grieving the loss of their family members because of gun violence. There is no question that this violence must end, and we are thinking of the families that lost their loved ones."

CNN classifies an incident as a mass shooting if four or more people are wounded or killed not including the gunman. However anyone calculates it, there’s little doubt that America’s crisis of gun violence is as deep and disturbing now as it has ever been

That sense of urgency is shared at the White House: President Joe Biden tweeting “we can and must do more to reduce gun violence and see lives,” his press secretary hitting home the same message. Jennifer Psaki, White House Press Secretary said: "We can't afford to wait as innocent lives are taken."

But America struggled with this crisis long before 2021. The Indianapolis shooting, leaving eight people dead, came the day before the 14th anniversary of the shootings at Virginia Tech University - when 32 victims were killed.

We’ve experienced mass shootings in Orlando in 2016, where the death toll climbed near 50 and in Las Vegas the following year, where 60 were gunned down. Analysts say it's come to define how the rest of the world looks at America.

Naftali said: "An American is far more likely to be the victim of gun violence than a Canadian, a Japanese citizen, a British citizen. Our allies are perplexed and worried about the fact that we can't seem to have a national conversation about the epidemic of gun violence in our country."

At least not a conversation that doesn’t devolve into a political battle between gun control advocates and Second Amendment supporters. In the meantime, one forensic psychiatrist says, Americans getting more and more desensitized to mass gun violence.

Dr. Lise Van Susteren, a forensic psychiatrist, said: "The body naturally responds from the horror and shock, to try to protect ourselves by increasingly becoming numb. And so now we are looking at what's happening around us -- and for us it's almost becoming normal."

Earlier this month, President Biden announced a series of executive actions aimed at taking the first of limited steps at curbing gun violence.