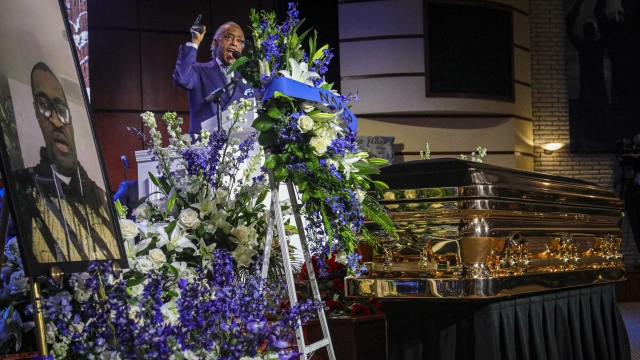 Across the country Thursday, Americans gathered for the first of three different memorials to remember George Floyd.

The main event was in Minneapolis at North Central University.

"All these people came to see my brother, and that's amazing to me that he touched so many people's hearts, you know, because he's been touching our hearts," Philonise Floyd, George Floyd's brother, said.

"We were like George: We couldn't breathe, not because it was something wrong with our lungs, but because you wouldn't take your knee off our neck. We don't want no favors, we just want you get up off us," Sharpton said.

And just 2 miles away at the people's memorial, hundreds paid their respects in the place the 46-year-old took his last breath.

At nearly the same time as the service, three of the former police officers involved in Floyd's death were served formal charges at the Hennepin County District Court: J. Alexander Kueng, Tou Thao and Thomas Lane are all charged with aiding and abetting second-degree murder.

Judge Paul Scoggin set bail for the three former officers at $750,000. If convicted, they could serve up to 40 years in prison.

Derek Chauvin, the former officer who knelt on Floyd's neck for nearly nine minutes, is set to appear in court Monday. Chauvin is charged with second-degree murder and second-degree manslaughter.