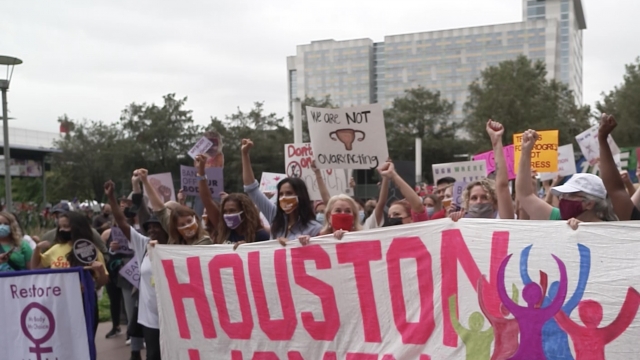 In Houston, thousands marching in solidarity with those across the country.  Their message: Don't mess with Texas women.

"No one should get to say what happens in my body to me, on my body," Padma Lakshmi said.

Celebrities — including "Top Chef" hosts Lakshmi and Gail Simmons, in town to film the show, joined Texas Democrats like Rep. Silvia Garcia to lead the way.

Step by step, signs in hand, generations of Texans fighting against what they say is a threat to their health care and reproductive rights.

March participants are fueled by SB8, the Texas law that went into effect Sept. 1 and bans abortion past 6 weeks, a point when many women don't realize they're pregnant. There are no exceptions for rape or incest.

"I am a Marine. I am a police officer. I do work in a male-dominated field, but I'm here to back our women," Robin Williams said. "Keep your hands off our body."

Lindsey Theis: "What do you hope, by seeing all of these people out here with you, that this does?

"Strength in numbers and to give hope to people who are scared right now and maybe can't show or voice their support," one marcher said. "We're here doing that for them, and hopefully they can then be able to join us. It's also sad we have to do this, but we're here."

The crowd — vocal in their anger but also expressing sadness.

"I'm disappointed that after so many years, it's like we're going back in time," Peah said.

Though women are front and center, this protest is not only about them. Just ask Landon Richie, who is transgender.

"If I needed an abortion in Texas and I was past six weeks, I would not be able to get it," Richie said. "So including trans people who are impacted by this legislation is crucial for the conversation we have about reproductive health care in general."

Determined. Defiant. And despite the rain, making a stand.