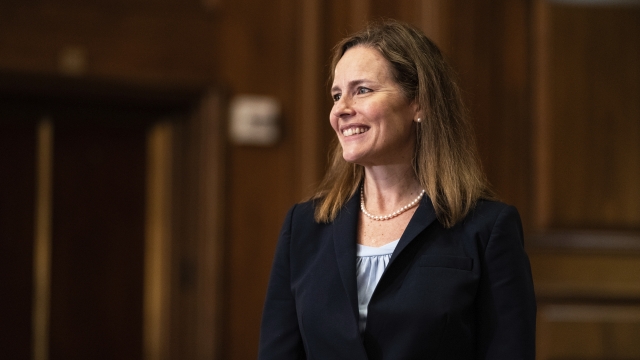 With Judge Amy Coney Barrett’s Supreme Court hearing just two weeks away, the cash is rolling in, on both sides of the aisle.

With Judge Amy Coney Barrett’s Supreme Court hearing just two weeks away, the cash is rolling in, on both sides of the aisle.

“A scholar, a judge, grounded in faith and family,” a narrator said.

On the heels of the nomination, the conservative Judicial Crisis Network announced a $10 million ad campaign in support of Judge Barrett.

A political ground game is also afoot, with the future of issues like abortion coming to the forefront.

"This is an incredibly important issue, especially to our voter. It will definitely be a big part of our campaign going forward,” said RNC spokesperson Liz Harrington.

“This actually really brings the abortion issue front and center once again to this election,” said Susan B. Anthony List VIce President of Communications Mallory Quigley.

Anti-abortion rights groups like the Susan B. Anthony List say the enthusiasm is partly due to Barrett herself and partly due to Chief Justice John Roberts siding with the liberal justices in a key abortion case over the summer.

“There's a heightened sensitivity to this issue now as we go door to door and I think that it fills the conversations between our canvassing team and voters,” said Quigley.

Destiny Lopez of All Above All, a group that works to ensure abortion access for women regardless of income, says the pandemic has shown the need for Democrats to think broader.

“A new administration really has an opportunity to re-imagine a post pandemic world, right, where we can earn a living wage, we can participate fully in democracy, and we have access to the health care we need, including abortion care,” suggested Lopez.

“She seems like a very fine person. But she’s written, before she went in the bench, which is her right, that she thinks that the Affordable Care Act is not Constitutional,” said Biden.

A key Supreme Court case regarding the future of Obamacare will take place November 10. If she’s confirmed by then, it’s very likely that Barrett will take part in that.