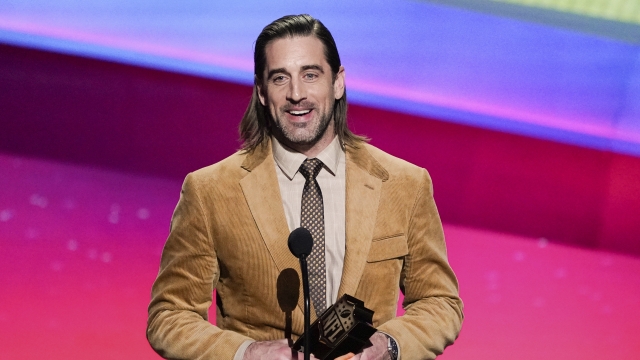 A four-time MVP, three Super Bowl players and the beginning of a brother act. The Associated Press 2021 NFL awards had a bit of everything, starting with Aaron Rodgers becoming the fifth player to repeat as Most Valuable Player.

"It is kind of surreal sitting here," Rodgers said. "Being a four-time MVP is crazy."

"They're all different. They're all unique in their own ways and this one feels the sweetest.”

Despite the turmoil of training camp and the headlines created by the Green Bay quarterback when he misled the public on his COVID-19 vaccination, Rodgers' play on the field was superb. So much so that he earned 39 votes from a nationwide panel of 50 media members who regularly cover the NFL. Not even one of Tom Brady's best performances — in his final season — came close in the MVP race, with the Buccaneers quarterback getting 10 votes.

Only Peyton Manning with five MVP awards is ahead of Rodgers, who said no announcement on his future in the NFL is imminent.

"There was something to how I felt walking off the field," he said. "I had great conversations with the Packers before I left town. There have been changes to the staff. Just comes down to weighing where I am at mentally and what the commitment is."

"I don't fear retirement and moving on. I'm very proud of what I have accomplished over being in Green Bay for 17 years. Also still highly competitive and bitter taste from the NFC game. I was frustrated about things during the offseason and I feel like there's so much growth. There were some things voiced privately, and I am thankful for the response. There were things done to make me feel special and important."

Other NFL Honors award winners include: