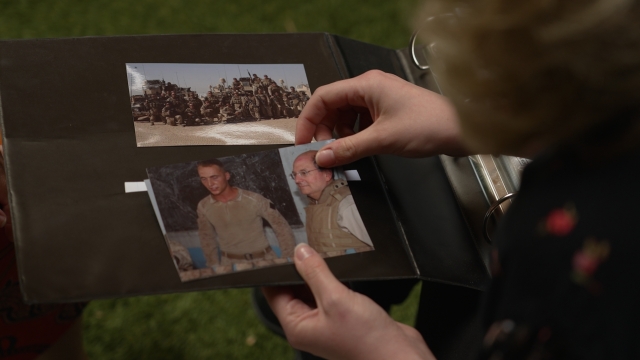 Rescuing two interpreters from Afghanistan was a late veteran's dying wish. His comrades are carrying on his mission.

Former Navy Corpsman Michael McCarthy took his own life in his L.A. apartment in August, just as Taliban troops were rolling toward Kabul in what ended in the country's collapse.

"We all know the horrors of war, you know, and a lot of the details Michael kept from us," McCarthy's stepfather Bob Dyl said. "He knew it would break our hearts and he kept it inside and he buried it there."

"We're all still in a little disbelief," McCarthy's sister Rebekah Dyl said. "I think he knew that they were going to take over Kabul well before they actually did. And I think that was kind of ... that was too much for him."

Corpsman McCarthy had spoken with Newsy just weeks before in the midst of a desperate and personal mission to rescue two interpreters he had worked with in Afghanistan.

"I personally put my hopes in the hands of God at this point," McCarthy said.

Before he died, at age 39, McCarthy got to see one former interpreter escape. "Wolf," as the Marines called him, is now living illegally in Turkey and fears he could be deported by a government that doesn't want Afghan refugees.

"The Turkish people call us 'spies of America.' I don't know why," Wolf said. "They said, 'You guys working with Americans and now Americans leave Afghanistan. Why you guys come here?'"

The other interpreter McCarthy was trying to evacuate said he couldn't get out.

"Hopefully — we wish — one day we can fly out and escape from this hellish country," former Afghan interpreter Danny said.

Newsy is using his military nickname for security. "Danny" and his family faced Taliban beatings and chaotic crowds as they tried to enter the airport in Kabul with the militants now controlling the city. He hadn't heard from McCarthy in days, so he opened his phone, turned to Facebook, and saw a Rest In Peace message on his wall.

Suicide is all too familiar to the Second Battalion, Seventh Marine Regiment, where McCarthy served.

"My youngest brother, Elias Reyes Jr., served in 2/7," McCarthy's friend Margarita Reyes said. "He did three deployments to Iraq, one to Afghanistan; the last one being with Michael McCarthy. My brother, in 2014, took his life. After having so many suicides from 2/7, it doesn't get easier. I think it's getting harder and harder."

Veterans of the 2/7 said they had six-hour firefights in Afghanistan and often ran out of ammunition with no air support, medivac or enough water. Calling themselves "the Forgotten Battalion," they'd watch their comrades die there and then at home.

At least 37 have ended their own lives, according to a database kept by a veteran of the unit. Some, like McCarthy, also struggled with addiction and homelessness.

A 2015 New York Times report found the 2/7 has a suicide rate 14 times the average for Americans. Surviving veterans have made a practice of coming to each other's aid when another suicide occurs. But after McCarthy's death, a group of vets is trying to finish what he started.

Former squad leader Dustin Batson had been working with McCarthy to try to get the interpreter Danny out of Afghanistan. Batson said he formed a bond with Danny on the day of a suicide bombing in 2008.

"A suicide bomber had jumped on the hood of the Humvee and blew himself up in the middle of the bazaar," Batson said. "So all the Marines were fine, but it killed and maimed a whole bunch of civilians. And so we as a quick reactionary force showed up and responded to it. And so, Mike, being our corpsman, treated all the wounded. A lot of them were small kids and it really affected him. He was never quite the same after that day."

Danny was by McCarthy's side helping him treat the wounded. Danny later became a doctor because of that experience, and McCarthy paid for his medical schooling in India. Danny and his family only returned to Afghanistan so that his ailing mother could die in their homeland.

SASHA INGBER: "How are you, from the United States, here in Texas, able to work on getting him out of Afghanistan?"

DUSTIN BATSON: "I don't know how much I want to say because it's like a security thing. But we have secured safe houses that are protected — and I say protected disgustingly enough — we have to pay off the Taliban to just basically not mess with them."

INGBER: "So what needs to happen now for Danny to leave Afghanistan?"

BATSON: "Permission from the State Department. That's it."

Batson is waiting for approval to put Danny and his family on a plane, with Doha agreeing to take them, but priority has been given to Americans and green card holders.

INGBER: "What if you don't get Danny out?"

Batson says he owes it to Danny and to McCarthy's memory.