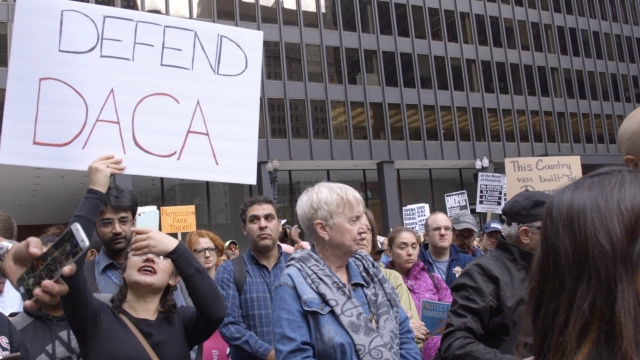 SMS
A Timeline Of The Trump Administration's Fight To End DACA
By Katie Cammarata
By Katie Cammarata
January 21, 2020
The Obama-era program protects over 700,000 undocumented immigrants who came to the U.S. at a young age from deportation.
SHOW TRANSCRIPT

President Donald Trump says he wants to end the Deferred Action for Childhood Arrivals program. That's the Obama-era program that protects over 700,000 undocumented immigrants who came to the U.S. at a young age from deportation.

But he hasn't exactly been decisive in his language when discussing it.

"We will immediately terminate President Obama's two illegal executive amnesties in which he defied federal law and the Constitution to give amnesty to approximately 5 million illegal immigrants, 5 million," the president said.

That was President Trump speaking at a campaign rally in Phoenix in August 2016. He's referring to DACA and what's called birthright citizenship — where an immigrant parent has a child on U.S. soil and that child is automatically a U.S. citizen.

Then, just a month after he was inaugurated in 2017, he seemed to have softened his stance a bit.

"We are going to deal with DACA with heart. I have to deal with a lot of politicians, don't forget, and I have to convince them that what I'm saying is right."

In September 2017, the Trump administration announced it was rescinding the program.

"Ending the previous administration's disrespect for the legislative process is an important first step. All immigration policies should serve the interests of the people of the United States — lawful immigrant and native born alike," then-Attorney General Jeff Sessions said.

Protests erupted outside the White House shortly after the announcement, and states quickly challenged it.

In January 2018, a federal judge in San Francisco issued a temporary, nationwide injunction blocking the Trump administration from ending DACA. The judge said the administration's decision to rescind DACA "was based on a flawed legal premise." Other judges issued similar orders. The Justice Department appealed to the Supreme Court.

Meanwhile, President Trump and bipartisan lawmakers tried to come to an agreement on DACA. Democrats tied the issue to a federal spending bill that had to be passed to avoid a government shutdown. But after long discussions, Congress failed to pass a spending bill and the government shut down for the first time in years.

The government reopened a couple of days later after President Trump signed a stop-gap spending bill, but it didn't address DACA.

Fast forward to June 2019. The Supreme Court agreed to hear oral arguments in the DACA case — actually three cases rolled into one. The high court now has to answer two questions: Do federal courts have the power to review President Trump's efforts to shut DACA down? And if so, were those efforts legal?

Newsy was there when the justices heard oral arguments in the case last November. They're expected to make a decision this summer.