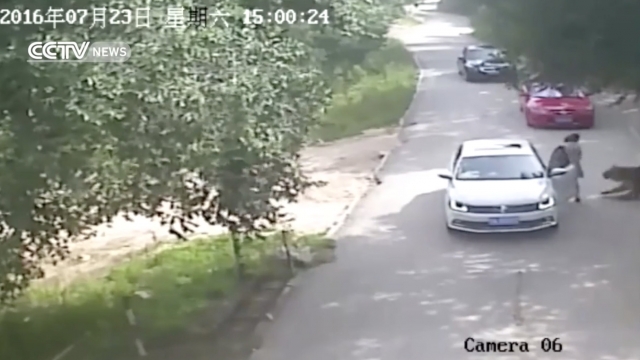 SMS
A Siberian Tiger Mauled A Mother Who Was Trying To Rescue Her Daughter
By Ryan Biek
By Ryan Biek
July 25, 2016
The incident occurred at a drive-through wildlife park in China.
SHOW TRANSCRIPT

Chinese officials say two women were attacked, one fatally, by tigers over the weekend after stepping out of their vehicle at a drive-through wildlife park near Beijing.

In the disturbing video, a woman exits the car and is dragged away seconds later by one of the tigers. The woman's husband and mother attempted to rescue her, but the mother was also attacked by a second tiger and killed. The first woman escaped but was badly injured.

Chinese outlets differ on what caused the woman to get out of the car, with some blaming an argument with her husband.

Badaling Wildlife World has an area where visitors can drive through a Siberian tiger enclosure. However, the park reportedly warns visitors not to leave their vehicles at any point.

Two years ago, a worker was attacked by a tiger at the park and died from his injuries at a local hospital. In 2009, an 18-year-old was mauled after he and two friends entered the area, mistaking it as a shortcut for a section of the Great Wall of China nearby.

This video includes clips from CCTV.