Changing The Approach To Address Wildfires 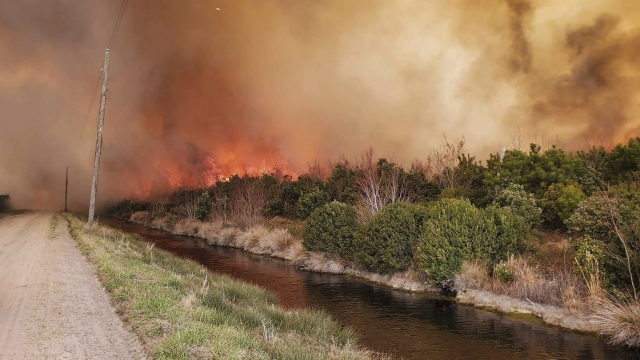 The most destructive fire in Colorado history resulted in the destruction of more than 1,000 homes.

And 700 miles away — weeks earlier — flames and smoke provided an unexpected backdrop to Christmas decorations as fire tore through the town of Denton, Montana.

Shawn Borgen is the superintendent of the Flathead Hotshots, which is one of the country's most skilled firefighting teams.

Signs of Smokey Bear hang in the Flathead Hotshots' northwest Montana home. It's a quonset hut built in the 1940s, which is the same era the iconic bear's slogan was introduced: Only you can prevent forest fires.

But the Colorado and Montana fires are recent examples of why that message and the fire fight aren't as simple as they used be.

"Fires that we go on, with a far higher consistency than I have experienced in 30 years, are burning with stronger volatility than I ever remember," Borgen said. "So we've got to adjust. And we are adjusting."

That adjustment includes a new wildfire crisis strategy put out by the U.S. Forest Service. It addresses everything from outdated forest management policies of total fire suppression, to climate change and expanded development into forested areas known as the wildland urban interface.

The plan of attack includes ramping up prescribed burns and vegetation thinning efforts to four times what's currently being done.

Complements of hotshot crews like Borgen's will go from 20 to 25. And they’re transitioning so 80% of the crew will now be on year-round, instead of mostly seasonal.

Unfortunately with the strong effect climate effect is having, this is going to get worse," said Alex Metcalf, a social scientist at the University of Montana. "We're going to have more fire on the landscape in surprising places that we  have to deal with."

How did we get here? For one, past management strategies.

The Forest Service says wildland fires were historically cool and low to the ground. And prescribed burns were used by Native Americans in the northern Rockies to keep trees widely spaced.

A 1911 federal policy put a halt to using ground fires for thinning and adopted a full suppression strategy in the 1930s.

"For 100 years, we suppressed fire," Metcalf said. "And when it got out of hand, it was a once in a rare event. And so we learned to treat it that way and many of us grew up treating it that way. We’re not going to get away with that for much longer."

Alex Metcalf and his wife Libby were just two authors of a 2019 publication that advocated many of the bullet points in the new plan.

It also called for a shift in how we think about all fire.

"It's making your community aware of what's happening." Libby Metcalf said. "Wildfire's coming, but how do we prepare for it?"

Climate change amplifies the fuel problem with warmer, dryer conditions and increased winds. It's changed the actual fire fight, with crews now focusing on protecting valuable assets in many cases.

"Some of them are so radical that we can't — I mean, you just cannot, you could not — line up enough bodies to stop a fire," said Shawn Borgen. "You can't, because even if you manage to stop the fire, maybe on the ground in its tracks, they still spot a half a mile, a mile."

There's also agreement that it will get worse before it gets better.

The Metcalfs say part of the solution includes community plans for how to deal with not only fires but smoke, and for creating safety zones.

"There really is a term in our field called wicked problems, that are not just hard, they're not just kind of changing a little bit. They live at the intersection of peoples' values. People value different things," Alex Metcalf said. "There are no right answers. And there are really no solutions. We have to figure out how to live with this. "