The U.S. Still Has Thousands Of Troops In The Middle East 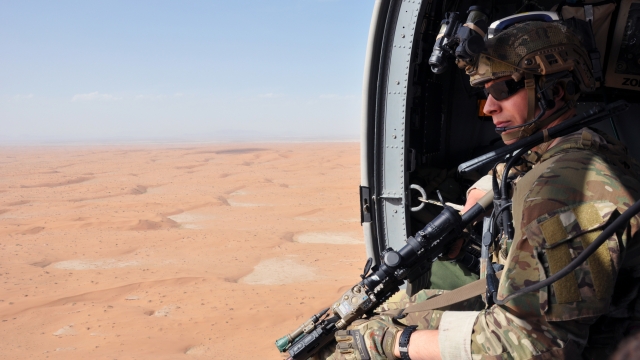 The U.S. military regularly deploys troops around the world. Thousands of people are stationed in allied countries like Germany, Italy, Japan and South Korea every year. But after 9/11, the U.S. started sending thousands of troops to the Middle East, starting with Operation Enduring Freedom.

For the first year of that offensive, a congressional report estimates that, on average, between 5,000 and 9,000 individuals were deployed on the ground in any given month. But thousands more participated from elsewhere, like from Navy ships positioned nearby. The number of troops on the ground in Afghanistan peaked in 2010 and 2011 at around 100,000. Since then, the count there has gradually dropped. Current U.S. troop levels in Afghanistan are estimated at about 12,000 or 13,000.

The U.S. has also had troops on the ground in Iraq for the last 16 years. That effort started in earnest in 2003 with the launch of Operation Iraqi Freedom. Six months after that invasion began, the U.S. had about 183,000 active duty military personnel stationed in and around Iraq. That operation officially came to an end in December 2011. By September the next year, there were less than 200 active duty military troops in Iraq.

But levels started going up again in 2014 with the beginning of Operation Inherent Resolve, the international task force focused on battling ISIS in Iraq and Syria. September 2017 was the last time the Department of Defense released specific personnel numbers for Iraq, Afghanistan and Syria. That quarterly report said about 27,300 active duty, reserve and civilian personnel were deployed in those three countries.

For years, politicians on both sides of the aisle have called for bringing troops home from the Middle East. Presumably, they're focused on bringing combat troops home, but achieving that is complicated. History shows a sudden drawback of U.S. troops can increase instability. President Barack Obama's 2011 withdrawal of troops from Iraq played a big role in the rise of ISIS, and ultimately thousands of U.S. troops were sent back to the region. More recently, President Donald Trump's withdrawal of U.S. troops from northeast Syria was followed immediately by a Turkish invasion.

Despite controversy over keeping troops in the Middle East, America has a vested interest in the region. The U.S. has been there to promote peace and human rights, to protect oil reserves and the global market from instability, and to defeat terrorist groups who can thrive there.