What To Know About SpaceX's Falcon Heavy Rocket Before It Launches 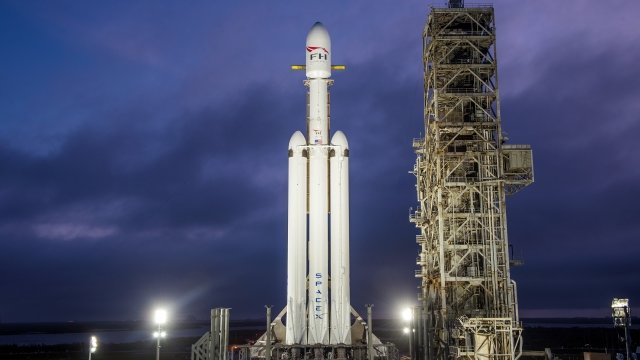 The world's largest rocket is slated to make its first flight in January.

SpaceX wasted no time in kicking off 2018 with the launch of the mysterious Zuma satellite. But many in the space community are anxiously awaiting the first flight of the Falcon Heavy rocket.

With three Falcon 9 rocket boosters and 27 engines, the Falcon Heavy can carry more than double the payload of the next closest rocket — a mass equivalent to a 737 jetliner. The only rocket that could lift more is NASA's Saturn V, last used to transport astronauts to the moon.

And even though this SpaceX rocket is meant for future human spaceflight, there won't be anyone on board for the trial run. Instead, CEO Elon Musk is sending a Tesla Roadster on the road trip of a lifetime with a destination of Mars' orbit.

SpaceX Might Have Lost A Super-Secret US Government Satellite

SpaceX launched the mysterious Zuma satellite on Sunday. Shortly after, rumors swirled that it was already lost.

SpaceX also will try to land all three rocket boosters for possible reuse in future launches — that's what keeps costs down, after all.

The Falcon Heavy is scheduled to lift off sometime in January, but no official date has been announced. In the meantime, SpaceX has teased us with photos of the world's largest rocket sitting on its launch pad in Cape Canaveral, Florida, patiently waiting for its maiden voyage.