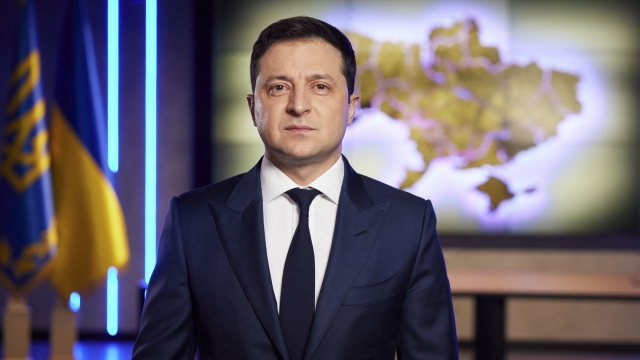 Volodymyr Zelenskyy is a new star for the international community. But for Ukrainians, their made-on-TV president has always been front-and-center.

"When I met him, he was so full of energy and full of ideas all the time," said former business partner Nicola Söderlund.

A lawyer by training and comic by trade, Zelenskyy carved out his place in Ukrainian entertainment in the early 2000s competing in comedy contests and producing TV shows before he was 30.

It wasn't just luck propelling this small-town outsider to center-stage in Ukrainian media. There was something about him. His energy, his timing, his ability to pierce through the screen and grab hold of an audience.

Movies followed and with enough star power, he started his own production company. But it was a satirical political comedy that would change his life most dramatically.

The story of a history teacher, unwittingly thrust into the Ukrainian presidency became his real world, when his characters' rants on political corruption spilled out of the TV and into real life.

"The comedy was in the clash between the expectations from the corrupt society, how we should behave, and this ordinary man," Söderlund said.

"He rode on on the popularity of the TV show, and then he got 73% of the votes. It was a landslide victory in the elections," Söderlund said.

From the start, his tenure was destined for headlines. But what ended up making him known to the rest of the world, is much more significant than TV president becomes real-life president.

First, finding himself tangled in the web of a questionable phone call with the American president and a remark that would lead to Donald Trump's first impeachment.

Then, it was growing tension with his neighboring country, which was a conflict already broken out in a war he had pledged to end but found difficult to deescalate.

"If you asked me about President Zelenskyy last year, I had sort of mixed views on him," said former ambassador to Ukraine Steven Pifer. "There were some things he was doing well, but I thought that he was falling short in terms of some of the critical reforms that had to be made in Ukraine really dealing with corruption and dealing with some of the oligarchs."

And now, with the pariah of the west blazing rockets and tanks into the heart of his country, Volodymyr Zelenskyy finds himself where no world leader wants to be — at the intersection of the gravest threat to global stability since World War II.

"You feel so much for him," Söderlund said. "He could be dead tomorrow."

Raised in a Russian-speaking town, part of a Jewish family and grandson to the only of four brothers to survive the Holocaust, he is, perhaps, at the human intersection of the Russian roots and Jewish minority that has come to define Vladimir Putin's twisted pretext for war.  A de-Nazification, he's called it. Rich for a man who has a Jewish leader — one of the few outside Israel — at the top of his hitlist.

"They do not know these streets," Zelenskyy said. "They do not know our people, do not understand our philosophy, our aspirations, what type of people we are. They don't know anything here. They were just sent here to fight and to die."

Despite the threat of assassination, Zelenskyy has daringly stood guard in the abandoned streets of his own capital, refused offers to leave and pleaded with his constituents in a flood of selfie videos and tweets to defend their home.

"I mean here is with his flak jacket on, out having morning tea with the soldiers in Kyiv. And he's saying, 'I'm gonna stay in Kyiv,'" Pifer said.

It is the kind of effective communication, the kind of piercing, human connection that made him a star to begin with. That now has the power to move even the most stoic of observers to world events.

In a speech to the European Parliament, Zelenskyy said: "We are fighting just for our land and for our freedom."

Observers say it may just be the secret ingredient to ward off Russia.

But even if Russia succeeds, Zelenskyy has already proven that as life imitates art. So, too, can art propel a nation to rally its courage and source its hope from one man — an artist staring down the barrel of a thousand guns to defend truth and democracy.

"And he's such a hero, I must say," Söderlund continued. "I'm full of admiration for him, what he's doing now. I don't think every, you know, every man would do the same."