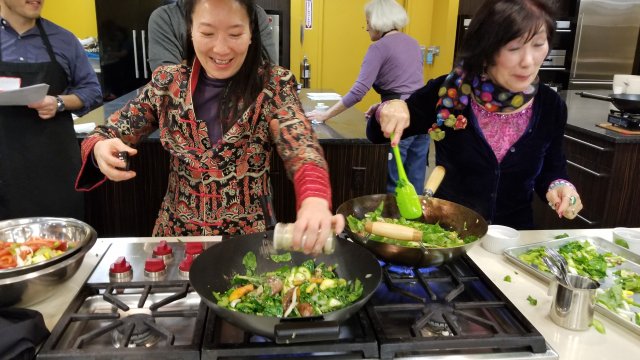 The deadly shootings in Atlanta that killed eight people, including  six Asian women. resonated with Natalie Keng and sticks with her when she leave her house.

Keng has done a lot of thinking and reflecting since the attack. She's a life-long Georgian, growing up in Smyrna, just outside Atlanta, and she was a child in the only Asian family in the neighborhood at the time.

"It was really very welcoming and warm. It's just when we went out in public with people who did not know us right away, then I would get the name-calling and lots of stares. Lots of stares," she recalled.

"It was really hard, as in the South, because the fact that you really didn't see other people like you around," Lily Pabian said.

Pabian is one of Keng's friends. When Pabian moved to the Atlanta area, she says there weren't many large Asian American communities.

"I remember clinging to my Laotian friends, my Vietnamese, Blacks and Latinos, and it just -- those are the people that I felt most comfortable with because we were all on the same page of, we're different," Pabian explained.

Asian Americans are one of the fastest growing demographics in Georgia, and Atlanta's population in particular has changed in the last two decades. But these Asian American communities aren't as large or established as New York City or San Francisco. But Keng and Pabian argue that's OK.

"It creates opportunities to be more open-minded for collaboration and interactions to happen more naturally," Keng said.

"People just kind of move out of the city and they move into suburbs and whatever. There are strong communities out there as well. And we're trying to also figure out how to gel, how to work more aligned," said Pabian.

While Keng and Pabian acknowledge the discrimination and microaggressions they have faced, they say that shouldn't define the South. Each of them, separately, found their own role in the community.

Keng created Chinese Southern Belle, embracing her Southern upbringing and Chinese identity. She describes it as a multi-faceted business, which includes food tours and cooking classes.

"It allows a great platform to have people come together to break egg rolls and break stereotypes together, or exchange a recipe or learn about where the food came from."

"It's really important that we've been here for 40 years, that we we remain this immigrant-friendly hub that's really represented the Southeast."

While both are fighting Asian American stereotypes, they also want to combat misconceptions of the American South.

"I've learned over the years to differentiate and have more, I guess, tolerance and patience -- from the curiosity, from the curious, from folks who are like, 'Where are you really from?' and not recoil from that but see that as an opportunity for engagement."