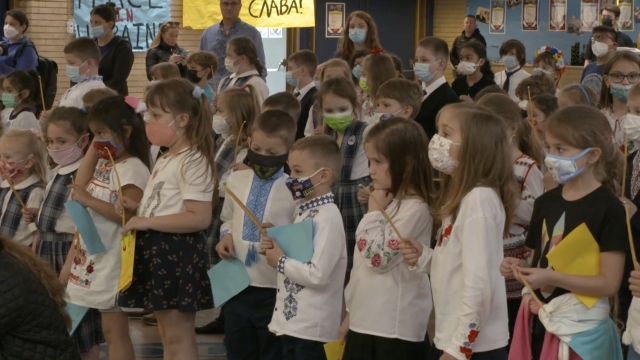 SMS
A Chicago School Is Helping Ukrainian Refugee Kids Feel At Home
By Ben Schamisso
By Ben Schamisso
June 13, 2022
A school in Chicago's Ukrainian Village has opened its door to more than 70 refugee kids as Russia continues its invasion.

On a Friday afternoon in Chicago, hundreds of Catholic school students are singing for Ukraine’s glory.

The children’s passionate display of support is partly to please their guests: veterans of the Ukrainian armed forces.

But that’s not all.

Most students there in the heart of Chicago’s Ukrainian Village have Ukrainian heritage themselves, and 72 of them are war refugees.

The school has been welcoming them with open arms after Russia invaded Ukraine in February.

With the new refugees, there are now 227 students — a 46% increase — and more continue to arrive on a near daily basis.

Peter, a 10-year-old, is one of the refugees. He says he feels a bit more at home after he recently fled Ukraine via Poland, Germany, Italy, Mexico and finally Chicago to join his grandparents there. He said he really loves America because "America helps us," meaning Ukraine.

When a new family arrives, a room full of donations is one of their first stops. Leading the herculean task to welcome all the new students is school principal Anna Cirilli.

“We start with the backpack, lunchbox, and we get them their school supplies, and then they go through and they pick whatever toys they want," Cirilli said. "It's going to just give the student a little bit of happiness and try to make this their new home for however long. No one really knows, right?”

The school has received so many donations, it turned a theater backstage area into a giant closet.

"We're not doing any play performances right now," Cirilli said. "This has all been provided by the community, and the moms that come, they come back and they help volunteer to organize everything.”

Cirilli says most refugee kids are coming with their mothers, leaving their fighting fathers behind. Some even come alone to join a distant relative already in the U.S.

NEWSY'S BEN SCHAMISSO: Why do you feel it is your responsibility to keep welcoming all these children from Ukraine?

ANNA CIRILLI: Can you imagine saying no? Like as a human? I can’t.

Cirilli says there might be a day when she does have to say no. She’s thinking about training nearby schools on what it takes to welcome refugees, but just thinking about it visibly upsets her.

"Don't take me there," Cirilli said. "I don't want to be upset. I don't get emotional about this stuff, but that would be a hard time. That would be difficult for me personally.”

In one second-grade class, the majority of students have Ukrainian heritage, and four are actual refugees.

One of them, 8-year-old Daniel, says via his translating buddy that he already has two best friends.

The class teacher, Jane Sotter, says the new and old students have hit it off right away.

“They've been wonderful and accepting and welcoming their new friends and making sure they feel comfortable and helping translate for me because I don't speak Ukrainian, but most of the class does," Sotter said.

Making a challenging year even trickier, the class also includes Russian students.  “It's been really hard on them as well and just kind of reckoning that in themselves of ‘Am I what my country has done?' or 'what my classmates might be feeling about me,' so that that's also been kind of a bit of a challenge," Sotter said.

Sotter says she’s beyond proud to be a part of the school’s mission to welcome refugees. She says word of what they’re doing is even reaching the battlefield in Ukraine.

“We've even heard that the moms are then communicating that to fathers who are back home in Ukraine fighting, and it helps them keep going," Sotter said.

All in all, everyone there — displaced or not — seems to be forming a loving and tight-knit community. While the new kids say the school feels like a home away from home, they also miss their real home.

"My child is so happy to be here, but he misses home," Ivanna Sabada said. "He misses his father and we pray all the time, and we hope that we come back soon.”

Visa issues, the grinding war back home and a thousand other factors make it hard to know what’s next.

But for now, for one afternoon, singing in unison, praying and meeting Ukrainian war heroes provides a much-needed morale boost.