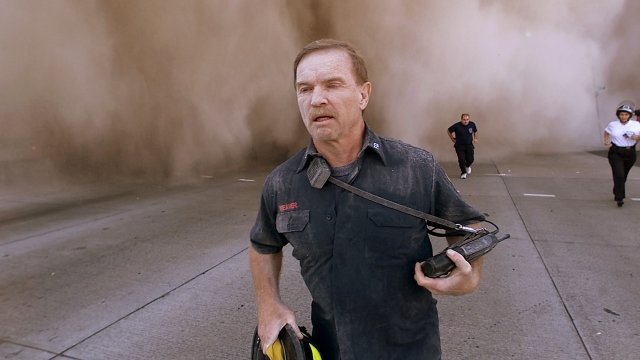 SMS
9/11 Toxic Air Was Initially Met With Skepticism
By Cat Sandoval
By Cat Sandoval
September 11, 2018
Today, almost 10,000 first responders and 9/11 survivors have been diagnosed with cancer, but initially not everyone believed exposure was dangerous.
SHOW TRANSCRIPT

Seventeen years after 9/11, the CDC reports that almost 10,000 first responders and survivors have been diagnosed with cancer. Nearly 3,000 people died during the attack and some outlets report that "Deaths from 9/11 diseases will soon outnumber those lost on that fateful day."

Bridget Gormley lost her firefighter father years after 9/11. He died of 9/11 related cancer. She said, "It sounds a bit morbid when I say this, but if you think about it, it was the perfect terrorist attack because you killed so many people that day, but not only that. Now you have this lasting effect that's going. And it's going to be multi-generations. There are kids that are being born with issues now, too."

Right after 9/11, there was a lot of skepticism about whether the air and dust at Ground Zero was dangerous. In fact, the former head of the EPA at that time, Christine Todd Whitman, declared that the air was safe. Five years after 9/11, she apologized. And as first responders sought treatment for respiratory problems, many didn't think that 9/11 was the main factor.

Personal injury attorney David Worby was one of the first to try to link Ground Zero exposure to diseases experienced by first responders and 9/11 workers.

Worby represented more than 8,000 first responders and clean-up workers at Ground Zero in a $1 billion class action lawsuit and won. The case found that the government failed to protect workers from toxins.

"In Washington, D.C., where OSHA ran the site, no one even got a cold. But in New York, where we took over the site ourselves, there was no hazmat protocol. People were eating on the pile. And all these people were predestined to get sick. Sadly, tragically, they are," he said.

Worby's quest to connect Ground Zero exposure to first responders' diseases started after his son's hockey coach, who was also a 9/11 cop, got diagnosed with cancer. He said, "No one understood that firemen, policemen, construction workers — that probably 85 percent of the people who were there — have pre-existing exposures to mercury, to lead, to construction debris to asbestos, to the smoke and the toxins."

Proving the connection wasn't always easy. Even the James Zadroga Act, which provided health monitoring services and compensation to 9/11 victims, failed to pass in 2006 due to skepticism. It was eventually passed in 2010. Today, there are more resources to support post-9/11-related diseases like the World Trade Center Health Program at Mount Sinai.