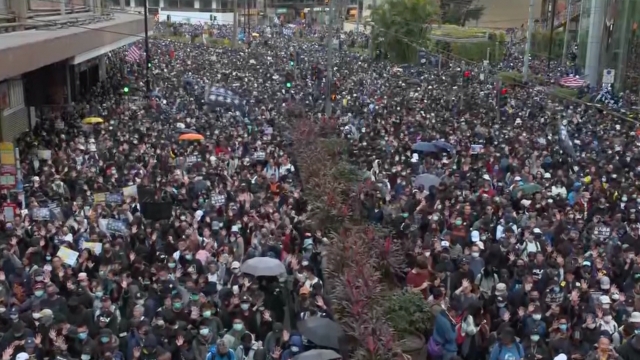 Around 800,000 people marched in Hong Kong on Sunday, the largest anti-government demonstration in months.

The march was organized by the local advocacy group, Civil Human Rights Front, and it reportedly stretched for miles. It was the first time since August that the group was allowed to hold a demonstration. The group said Sunday's rally was "the last time to meet their demands" of investigating the police brutality during previous protests and getting amnesty for those arrested.

Protests against a proposed extradition bill have been ongoing since June. Even though the bill was formally withdrawn in October, protesters did not let up. More than 6,000 people have been arrested since protests began and two people have died. But Sunday's march, while large, was mostly peaceful.

But other reports say some protesters vandalized shops, the city's High Court and the Court of Final Appeal. Police say they also recovered a handgun with more than 100 bullets before the march even started. A total of 11 people were arrested in Sunday's march.

Despite the arrests and vandalism, the Chinese government said in a statement after the march that it was willing to find "a way out for Hong Kong's deep problems through dialogue."