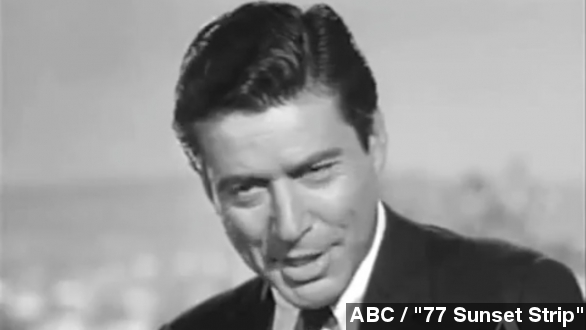 By Katherine Biek
May 3, 2014
Actor Efrem Zimbalist Jr., best known for his work in "77 Sunset Strip" and "The F.B.I," died at his home Friday of natural causes.
SHOW TRANSCRIPT

Gracing television screens for 15 straight seasons, Zimbalist is probably best known for playing a wise-cracking private detective in the ABC drama "77 Sunset Strip" and staring as Inspector Lewis Erskine in "The F.B.I." (Via ABC / "77 Sunset Strip", ABC / "The F.B.I.")

And it's perhaps no surprise Zimbalist had such a successful acting career: he was practically born into show business. His father was a concert violinist and composer, and his mother was concert soprano Alma Gluck. (Via U.S. Library of Congress)

Variety reports Zimbalist attended Yale University before enlisting to serve in the army during World War II, for which he was awarded a Purple Heart. Having caught the acting bus, he returned to Yale's School of Drama after the war.

He later starred opposite Spencer Tracey in "The Rugged Path" on Broadway in his first professional role. (Via Columbia Pictures / "Guess Who's Coming To Dinner")

The actor was later given a seven-year contract with Warner Brothers, which cast him in several of its movies before giving him the lead in "77 Sunset Strip." (Via Warner Bros. / "The Chapman Report")

But the Los Angeles Times quotes Zimablist, who wasn't really keen on the idea at first: "I didn't want to do television. They told me I was going to make a pilot, and they showed me in my contract where it said I had to."

And good thing he did, because it was that television series that really cemented him as a star. And he must have learned to enjoy it along the way, because he came back and starred for nine seasons in "The F.B.I."

In 2009, Zimbalist was named an honorary Special Agent by FBI director Robert Mueller. The Hollywood Reporter reports Mueller said "Efrem's character embodied fidelity, bravery and integrity. So much so that he inspired a generation of future FBI employees, many of whom pursued a career in the bureau because they watched 'The F.B.I.' series as they grew up."

Just a glance at his IMDb page shows Zimbalist had a long and illustrious acting career. Years after he stared in those two shows, he provided the voices for characters in the animated "Batman" and "Spider-Man" series.

Zimbalist is survived by his two children, four grandchildren and three great-grandchildren.