7.8M Australians Said 'Yes' To Same-Sex Marriage — What Happens Next? 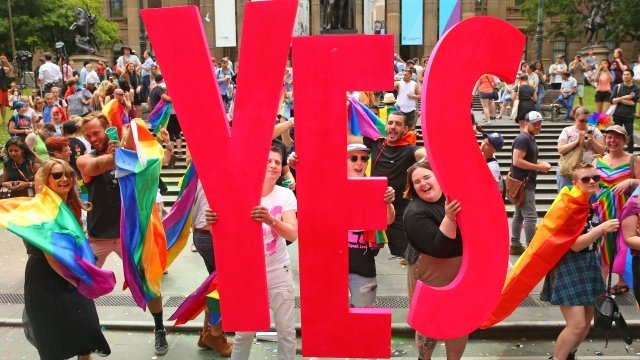 SMS
7.8M Australians Said 'Yes' To Same-Sex Marriage — What Happens Next?
By Casey Mendoza
By Casey Mendoza
November 14, 2017
Supporters of same-sex marriage are hoping the country will legalize it before Christmas.
SHOW TRANSCRIPT

Australians just showed overwhelming support for same-sex marriage, and that means the country could legalize it very soon.

In a historic postal survey, 61.6 percent of more than 12.7 million Australians voted "yes" to allow same-sex couples to marry. Crowds celebrated on the streets after the results were announced.

The vote was nonbinding and noncompulsory, but the results could compel the government to allow same-sex marriage before Christmas. 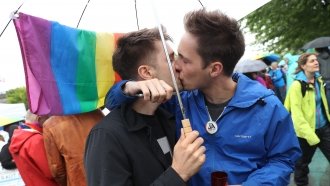 Regarding the results, Prime Minister Malcolm Turnbull said: "[Australians] voted yes for fairness, yes for commitment, yes for love. And now it is up to us here in the Parliament of Australia to get on with it."

Despite the strong support, the topic proved to be very contentious and politically divisive.

Two bills regarding the legalization of same-sex marriage are now headed to the Australian Senate, but while some politicians said they'd vote based on the survey results, others said they would still vote "no."

Some conservative members of Parliament will also reportedly push to allow businesses to refuse to provide goods and services for same-sex weddings.