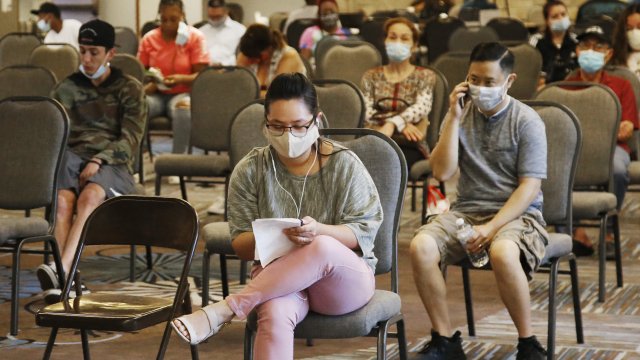 SMS
$600 Additional Virus Aid To End For Unemployed
By Meg Hilling
By Meg Hilling
July 20, 2020
Some GOP say the cash encourages people not to work while Democrats say it is necessary to help struggling Americans during high unemployment.
SHOW TRANSCRIPT

This week marks the final week Americans will receive an additional $600 unemployment payment as part of the coronavirus relief package approved by Congress in March.

While the relief program does not expire until July 31, the payments are only provided on weeks ending on either Saturday or Sunday.

The end of this additional payment comes as the U.S. grapples with new layoffs as coronavirus case numbers surge in parts of the country. This is prompting calls for extended help.

Work on a potential second stimulus package is getting underway, according to White House chief of staff Mark Meadows.  Meadows told Fox News that negotiations for what will actually be included in the bill are starting "in earnest" Monday between the Trump administration and Republican leaders on Capitol Hill.

The additional payment, on top of state benefits, has been a bit controversial as some Americans are collecting more than what they earn while employed — about 2/3rds according to one study. Some Republicans say the cash is encouraging people NOT to go to work. Democrats argue the $600 payments must continue to shore up the economy.