Amazon And Netflix Make History At The 2018 Emmy Awards 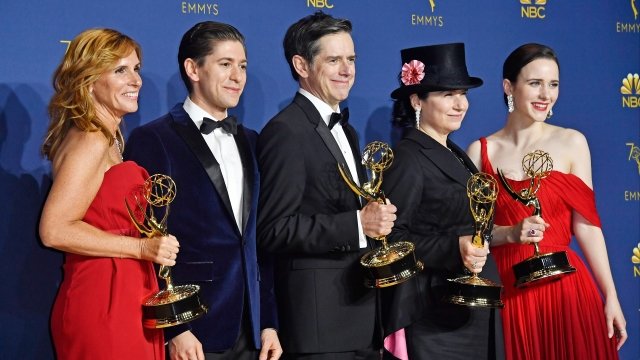 SMS
Amazon And Netflix Make History At The 2018 Emmy Awards

Amazon's "The Marvelous Mrs. Maisel" had a pretty — dare we say — marvelous night at the 2018 Emmy Awards.

"Maisel" led the pack this year on the comedy side of things, winning eight of the 14 categories it was nominated in — including outstanding writing and direction for a comedy series and a lead actress win for star Rachel Brosnahan.

"Maisel" also won the Emmy award for outstanding comedy series. It's the first time the Television Academy selected a TV series from a streaming service in this category.

But Amazon was not the streaming platform with the most wins this year — that honor goes to Netflix. It won 23 awards, tying with HBO. It's now the 17th year the cable channel can say it's ended up on top — meanwhile, this is only the fifth year that Netflix has even been nominated.

Helping out Netflix's total this year was Claire Foy who won outstanding lead actress in a drama series for her portrayal of a young Queen Elizabeth in "The Crown."

And on the HBO side of things, its fantasy series "Game of Thrones" scored big with nine wins for its seventh season, including the coveted outstanding drama series category.

Other big winners Monday night were Bill Hader who won outstanding comedy actor for his series "Barry" and outstanding drama actor winner Matthew Rhys for "The Americans." And we can't forget director Glenn Weiss — who proposed to his girlfriend during his acceptance speech. Luckily, she said yes.