The End Of The Space Race: The Apollo 11 Moon Landing 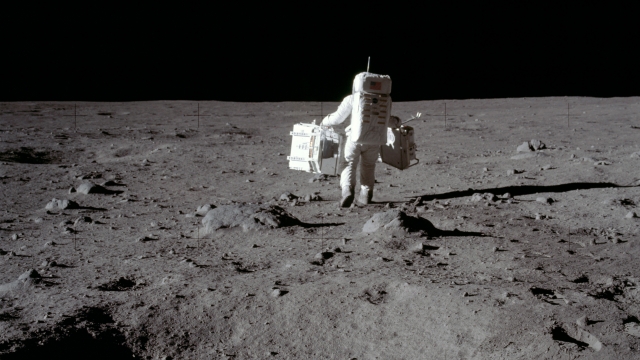 The U.S.' space program today isn't quite what it was half a century ago.

"It's one small step for a man, one giant leap for mankind."

The historic moment was years in the making.

Let's go back to May 25, 1961. President John F. Kennedy was addressing a special joint session of Congress.

"I believe this nation should commit itself to achieving the goal, before this decade is out, of landing a man on the moon and returning him safely to Earth. No single space project in this period will be more impressive to mankind, or more important for the long-range exploration of space; and none will be so difficult or expensive to accomplish."

The U.S. had been trailing the Soviet Union in the so-called "space race." On Oct. 4, 1957, the Soviets launched Sputnik into the atmosphere. It was the first man-made object to be put into space and the world's first artificial satellite.

The U.S. wasn't far behind and launched its own satellite, Explorer 1, on Jan. 31, 1958. Later that year, President Dwight D. Eisenhower proposed the creation of a civilian National Aeronautics and Space Agency, to be based on the existing National Advisory Committee on Aeronautics. NASA was officially founded on Oct. 1, 1958.

The major goal of sending an American into space — called Project Mercury — was achieved in 1961. And now we're caught up with JFK's speech.

After that, the U.S. sent an astronaut to orbit the Earth and started its lunar landing program: Project Apollo.

In December 1968, the first manned space mission to orbit the moon, Apollo 8, launched and successfully completed its mission. And with Armstrong and Aldrin's first steps on the moon, the U.S. essentially declared victory in the space race.

So where's the U.S.' space program now? It's not quite as robust as it was 50 years ago. We've got astronauts on the International Space Station, which has housed humans continuously since 2000. NASA has also contracted commercial companies like SpaceX to help "deliver science investigations, cargo, and supplies to the crews living in space." According to NASA, Boeing and SpaceX will soon help carry astronauts to and from the ISS.

And in 2018, President Donald Trump ordered the creation of a new military branch that would deal with space-related operations: the Space Force. At the time, he said the U.S. will fall behind China and Russia if it doesn't start putting more resources into space defense.

"The future of American space leadership. We're going to lead again. It's been a long time — it's over 25 years. And we're opening up, and we're going to be leading again like we've never led before. We're a nation of pioneers, and the next great American frontier is space. And we never completed — we started, but we never completed. We stopped, but now we start again," the president said.