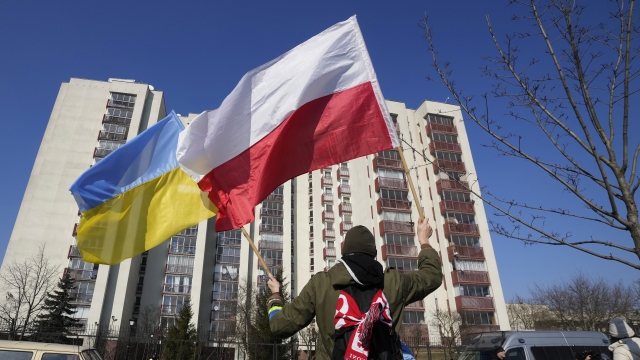 Some protests are symbolic. In Lithuania, protesters dyed the lake near the Russian embassy in Vilnius blood red.

But in a rare show of diplomatic force, throughout European countries have expelled hundreds of Russian diplomats. It is not just a denunciation of the invasion. They're accusing the diplomats of being spies.

The spokesperson for Poland's Ministry of Foreign Affairs,  Lukasz Jasina, told Newsy the 45 Russian spies expelled there were not just collecting information and conducting influence operations on Polish citizens. They were also targeting Ukrainian refugees fleeing the war.

"They were officially diplomats, but they were doing something else usually. And I think everybody who's seen movies about spies or movies about James Bond knows what I mean," Jasina said. "Some of those diplomats were searching for information about some refugees, who are trained to locate places they live, and even in contact with them and blackmailing them with the fate of their families in Ukraine. It may be Russian so-called diplomats were searching for someone to cooperate with them."

Marc Polymeropoulos, former Chief of CIA operations in the region, says he's never seen anything like this in his near 30-year career.

"I mean 400 Russian officials, you know, expelled from Europe is absolutely extraordinary. And again, to us, you know, particularly former intelligence officers, this is something that was long overdue," he said. "For a long time, we worked under the assumption that, you know, Russia uses Europe as their playground. They really got away with everything, including murder, including assassination operations."

The forced exodus from Norway to Portugal, Greece to Poland is seen as a blow to Moscow's efforts.

It comes as Russia sees intelligence collection in the West as more critical than ever, according to former U.S. senior defense attaché to Russia, retired Brig. Gen. Peter Zwack.

"It is now, I think from a Russian perspective, existential," he said. "They feel they've got to do it to survive. We all do, but they really, really need to do it for the regime to survive. The absolute persistent, relentless efforts to penetrate and collect."

"If a diplomat goes back, it doesn't mean that his source network has disappeared. He just may have a bigger challenge of how he's going to contact his sources," he said. "And so those networks that have been cultivated, spies that have been recruited, still exist even if diplomats get sent back."

Russia could also potentially tap into partnerships with allies, like Belarus or Syria.

"I think the list is small, but ... if you kind of take a look at the state sponsor of terrorism list — which includes, you know, Syria, Iran, you know, Cuba — I would imagine the Russians are reaching out to their allies," Polymeropoulos said. "But again, I'm not sure that they would be as trusting in having these other services actually handle an agent of theirs. It's just something that is not really in the Russian character's psyche."

In a statement to Newsy, a U.S. State Department spokesperson said, "The United States applauds recent expulsions of Russia’s intelligence officers … We stand united with our partners in protecting their national security from the Russian Federation's intelligence threats and against threats to democracy."