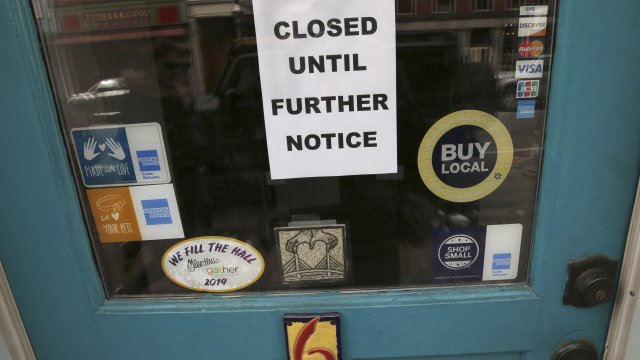 SMS
Poll: 1 In 3 Americans Has Lost Income During Pandemic
By Andrew Rafferty
By Andrew Rafferty
March 25, 2020
A new survey from Newsy and Ipsos found a large swath of the country is already feeling the economic downturn — especially the young.
SHOW TRANSCRIPT

One in three American say they've lost income due to the coronavirus pandemic.

The findings are part of a Newsy/Ipsos survey released Wednesday that sheds new light on just how deeply the country is feeling the impact of the economic downturn.

Thirty-two percent say they've lost income in the past week.

"This poll shows us that Americans are really grappling with the severity of the COVID-19 outbreak. And they are starting to feel the effects," said Ipsos Director Mallory Newall.

Young people are among the hardest-hit: 53% of Americans between 18 and 34 report having their work hours cut or losing their jobs.

And there is greater uncertainty among younger generations about their economic futures. Fifty-seven percent of Generation Z and 50% of millennials feel they will lose income in the next month.

"The younger you are, you more likely feel that you've either lost income or that you will lose income in the next month. So there is a greater feeling of insecurity among our youngest survey respondents," said Newall.

The findings come as officials continue to weigh measures protecting the nation's physical and financial health.

"I'm also hopeful to have Americans working again by that Easter — that beautiful Easter day.  But rest assured, every decision we make is grounded solely on the health, safety and wellbeing of our citizens," President Trump said Tuesday.

The survey also found overwhelming support for the government to freeze loan payments and send checks to U.S. adults.

And some good news: Americans are taking the outbreak seriously. Ninety-two percent of respondents said it is important to stay at home over the next two weeks to prevent the spread of coronavirus.