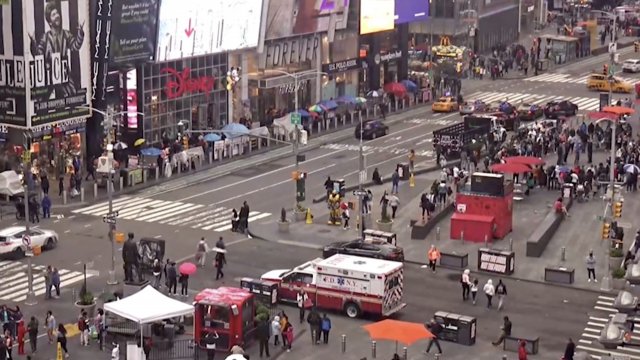 SMS
Three People, Including 4-Year-Old, Injured In New York City Gunfire
By Alex Arger
By Alex Arger
May 9, 2021
A four-year-old girl in a stroller shopping with her family was recovering after surgery.
SHOW TRANSCRIPT

One of America's most famous public spaces...New York City's Times Square...was the site over the weekend of an infamous American phenomenon...innocent bystanders being shot.

Three people...including a 4-year-old Brooklyn girl in a stroller shopping with her family...caught in a crossfire as a group of men began fighting.

Video shows people running in panic shortly after the shots rang out.

The girl is expected to recover from a gunshot wound to her leg.

"We have the 4-year-old that is going to undergo surgery, last we heard, a very brave girl that was here buying toys when she was shot," Dermot Shea, New York City Police Commissioner, said.

And the other two victims are also expected to recover in an incident New York Mayor Bill de Blasio blames on...quote..."a flood of illegal guns into our city."

Suspects are still at large, but one person of interest is in custody who was video recorded walking away from the scene.

Same day...1,200 miles south...five people were injured in gunfire at a mall near Miami. Social media capturing the terror of shoppers running from the Aventura Mall.

Police said the shooting came as two groups of people fought in front of a Hugo Boss store. Several suspects were in custody.