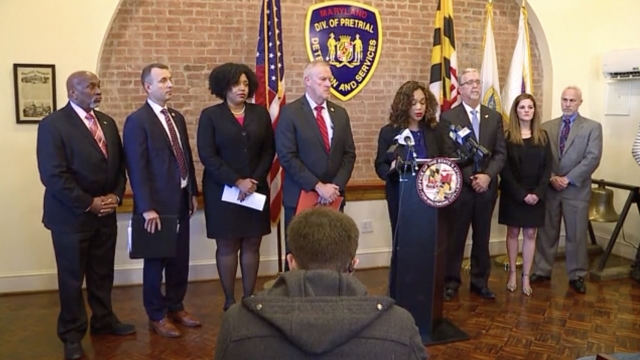 Combined, the officers face 236 counts that include excessive force, intimidation, tampering with evidence and falsifying records.

"All 25 of these correctional officers have allegedly abused their power and abused our trust."

Twenty-five correctional officers in Baltimore's Central Regional Tactical Unit have been indicted on accusations of using excessive force on prisoners throughout Maryland.

On Tuesday, the Baltimore State's Attorney's Office and Department of Corrections announced a total of 236 counts including excessive force, intimidation, falsifying documents, tampering with evidence, participation in a criminal gang and misconduct in office. State's Attorney Marilyn Mosby said some of the alleged offenses date back to 2016.

"Today's indictment demonstrates my office's commitment to ensuring one standard of justice for all, regardless of one's race, sex, religion, and, as I've stated before, even occupation. If you break the law and you break the trust and the authority that the public has placed within you, you will face the consequences."

Robert Green, the secretary of Maryland correctional services, said all 25 officers have been on administrative leave since 2018 when the investigation started.

"This case represents our strong effort to root out people who don’t belong in the field where public safety and rehabilitation is the mission. This is a disturbing case, but it does not represent, nor should it cast a shadow on, the commitment and integrity of the exceptional correctional professionals in this department."

Mosby said 21 of the 25 indicted officers were taken into custody Tuesday. The investigation is ongoing.