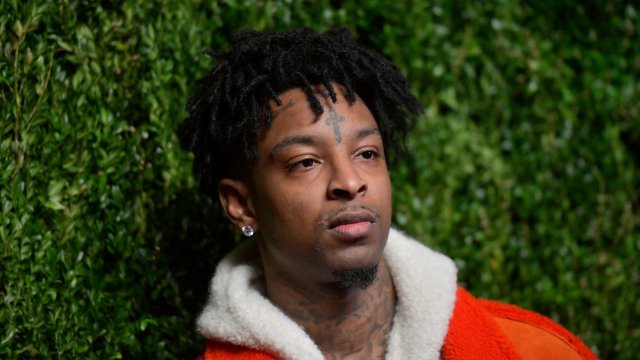 SMS
Here's More About The Visa That Could Help 21 Savage Stay In The US
By Ben Schamisso
By Ben Schamisso
February 8, 2019
It's available to certain victims of crimes who help investigators. We caught up with one applicant whose deportation was deferred after she applied.
SHOW TRANSCRIPT

The arrest of Atlanta-based rapper 21 Savage by ICE has shocked a lot of people, and for a lot of reasons. For starters, many of the Grammy-nominated artist's fans didn't even know he was born in the U.K.

Some background is important here: 21 Savage legally came to the U.S. as a child but overstayed his visa. His lawyer says that happened "through no fault of his own" because he was a teenager when it happened.

Whether or not 21 Savage will be deported depends on how an immigration judge rules on his case. One way the artist could be allowed to stay in the country is through a special visa for victims of serious crimes. His attorney says the rapper applied for that visa in 2017 on the basis of a 2013 incident in which he was shot and a friend was murdered.

So what exactly is that visa program, and why was it created in the first place?

Undocumented victims of serious crimes sometimes qualify for a U visa. But that's only if they've suffered physical or mental abuse as a result of the crime and cooperated with investigators. The program is meant to help law enforcement prosecute criminals by encouraging undocumented victims to come forward.

"We also have the right to be treated with dignity and justice," said Genoveva Ramirez.

Genoveva Ramirez has been undocumented for more than 25 years, but she might one day have a path to a green card. That's thanks to her U visa application, which she filed a few years ago after being attacked during a burglary and assisting the police.

Ramirez doesn't know the outcome of her application yet because it currently takes over four years for the government to process these cases. But in the meantime, she's applied for and has received a work permit.

And that's quite the turnaround for the grandmother of 10 and mother of four. In 2017, ICE told her she had two months to leave the country. But a lawsuit filed on her behalf led immigration authorities to start reviewing her pending U visa case — and to defer her deportation.

Ramirez: "The lawyer gave me a call and said, 'What are you doing?' I said, 'I'm preparing my things to go to work,' and she tells me: 'I want you to sit and to listen to this. Your deportation has been stopped.' And I said, 'Oh!' I was happy. Because in that moment, I felt more peace for me and my family."

Ramirez's husband and daughter have also applied for a "derivative U visa" because they are qualifying family members.

The government only grants 10,000 U visas a year, but the number of people who apply is much higher. As a result, there are currently more than 200,000 pending cases. Many immigrant advocates want the cap to be raised or eliminated entirely. But critics of the program say it's too broad and "subject to fraud," especially since eligible applicants are shielded from deportation until their case is adjudicated.