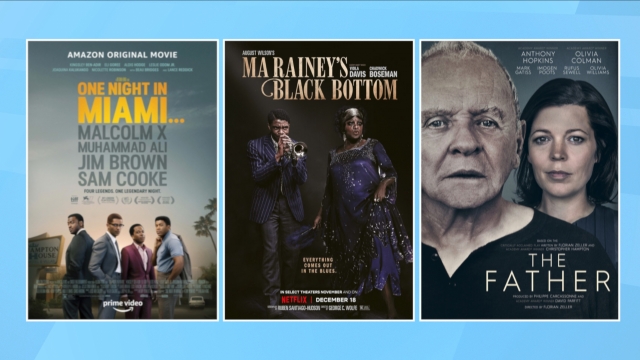 SMS
Oscar Looks To The Stage To Mine Hollywood Screen Gems
By Casey Mendoza
By Casey Mendoza
April 21, 2021
Oscar-nominated films "Ma Rainey's Black Bottom," "One Night In Miami" and "The Father" each made the journey from stage to screen.
SHOW TRANSCRIPT

From "Amadeus," to "One Flew Over The Cuckoo's Nest" to "Moonlight," the Oscars love to celebrate play adaptations. And three of this year's biggest contenders made that same journey from stage to screen: "Ma Rainey's Black Bottom," "One Night In Miami" and "The Father."

Actor and producer Denzel Washington: "I saw 'Ma Rainey' in the mid 80s, and was blown away."

Telling the story of the "Mother of the Blues," Gertrude "Ma" Rainey, and the exploitation of Black artists in the 1920s, "Ma Rainey's Black Bottom" is the second adaptation of August Wilson's plays from actor and producer Denzel Washington.

The original stage production earned three Tony nominations in 1985 — including a nomination for best play. Tony award-winning actor and writer Ruben Santiago Hudson took the helm of the film adaptation.

Actor Colman Domingo: "He knew that he needed to, as they say, open up the world from stage to screen. … He took great strides to trim it down, truncate some of the language, but still give us enough to build on."

Washington: "I wanted to get people who understood the theater and how it works, and they've had success at it, know what a play is, obviously what a film is, and how to blend those two."

Telling the story of civil rights icons Malcolm X, Jim Brown, Sam Cooke and Muhammad Ali, "One Night In Miami" originally debuted in 2013 as a dialogue-heavy play that took place entirely in one room. The film was written and adapted by Kemp Powers, and directed by Regina King in her feature directorial debut.

King: "Reading it, Kemp Powers' words, his dialogue just punched me in the gut."

Nominated for the Oscar for best adapted screenplay, Powers and King have spoken on the importance of opening up the play to the world — making it less intimate than the original source material, but still finding ways to focus on the conversations and debates between the four main characters.

King: "A lot of that came from just having a great quartet of actors, where they truly understood that they were brothers. … I definitely went into this feeling like the dialogue is the star."

Also nominated for best adapted screenplay is "The Father," an exploration of dementia by Florian Zeller. The French playwright told The New York Times that the film allowed the story to be more immersive and better convey the disorientation faced by the main character.