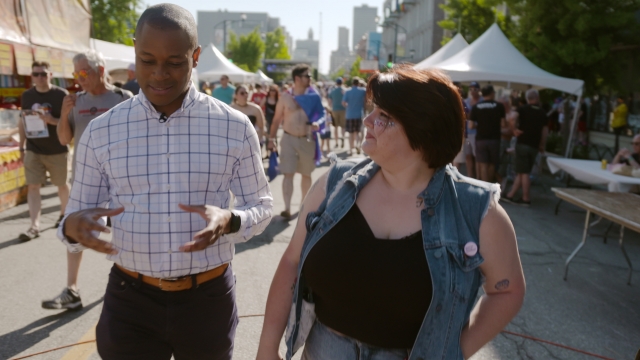 Looking at Des Moines, Iowa's 41st pride festival, the progress for the LGBTQ movement is obvious. But once the crowds clear, advocates will again go back to work for what many view as the next frontier for the LGBTQ community -- the rights of those who identify as transgender and non-binary, especially for those living in rural America.

So we're here at pride, your face says it all. ---(Barrett laughs)---[So] how are you feeling coming out here this weekend in Des Moines?

"It's funny because growing up I never went to Pride," said Isa Barrett. There just wasn't a Pride in my town the nearest pride was an hour away. My parents didn't know I was like gay. It just didn't happen."

Isa Barrett identifies as transgender and non-binary --meaning Barrett does not identify with a gender or use gender specific pronouns. After high school, Barrett moved from a small town to a larger city in search of access to education, career opportunities and a more inclusive environment.Things Barrett says weren't available growing up in rural Minnesota.

"Do you feel like people in your hometown would be as accepting as people here in Des Moines?"

"I know that if I went back now and I was just a lesbian to them, I think I would be OK," Barrett added. "Once I started introducing like the trans end of things I think it would become less OK. God I haven't thought a lot about this recently because it's like heartbreaking. God I'd love to go back. But I know that I couldn't really live there, there aren't really any opportunities for me there. It's not as accepting as Des Moines."

Activists say LGBTQ rights took a leap forward with national marriage equality, but they are now working to make sure transgender issues are part of the conversation for the 2020 presidential campaign. A major part of that is the continued fight for the Equality Act -- which would ban discrimination of LGBTQ people in public places, employment, housing, education and other areas of life.

Though the Equality Act remains stalled in Congress, states like Iowa and those marked here in green do have protections against discrimination on the books. 27 states, marked here in red, have limited or no protections in place. And trans rights, like the ability to change gender markers on IDs aren't widely available in a majority of states.

A recent  from the Movement Advancement Project estimated 2.9 to 3.8 million gay, bisexual, transgender and queer Americans live outside urban centers. And they face unique challenges that range from housing and employment discrimination to access to health care.

33% of transgender people reported facing discrimination when seeking out health care in the past year.

"There's just a lack of resources that specifically are catered to the LGBTQ community and we hear from so many transgender individuals who have to travel at least two hours just to access health care," said Daniel Hoffman-Zinnel, who is the executive director of One Iowa.

The 2020 Democratic presidential field has put LGBTQ rights at the forefront of the campaign. They have been extremely critical of the Trump administration's proposed rollback of Obama-era transgender health care protections. A move the administration defends citing current national sex discrimination law enacted by Congress and court rulings that blocked the changes proposed by the Obama administration.

In response to this story the White House sent Newsy a statement which reads in part. "President Trump has never considered LGBT Americans second class citizens and has opposed discrimination of any kind against them."

One of Trump's top critics on this issue is Democratic presidential candidate Kirsten Gillibrand . In addition to the Equality Act, she also wants transgender and non-binary people to be able to have an X on their identification documents if they do not identify as male or female. And access to health care including procedures related to gender reassignment is one of her top concerns.

"So first of all, making sure they have access to coverage, insurance coverage and health care for whatever treatments they need and want, Gillibrand said. "Making sure that we fund the legislation that protects against violence against transgender communities as well as LGBTQ communities overall."

Gillibrand and other 2020 candidates are also aware of how much a community's location plays into it's progress. For instance, Des Moines has been celebrating pride for more than four decades, while in Orange City, Iowa about 3.5 hours northwest from the capital, hosted its first celebration just three years ago.

"Did you receive support or push back from the community I'm sure there [was] some of both right?"

"Yeah, I mean we received a lot of support form Iowa pride organizations," said Mike Goll, one of the organizers of Orange City Pride. "Locally, it was a mixed bag I feel like the town is very nice very kind but it's also very conservative culturally."

The Movement Advancement Project report outlines in detail the lack of support structures in rural America for LGBTQ people. It also highlights the need for outlets to turn to when discrimination occurs, and the increased visibility that comes with living in small towns. Despite these challenges, the OC Pride group hopes to continue to be a catalyst for change to those around them and ignite a debate among political leaders who are working to get their vote.

"We see this town that may or may not handle their boring gays and lesbians you know and that's a work in progress," Goll added. "But there's all these beautiful trans and non-binary young adults and like kids, popping up out of the woodwork. Again they've always been here. But we're seeing more and more and so it's an impetus for us to kick up our game to make this place a safe environment for them."