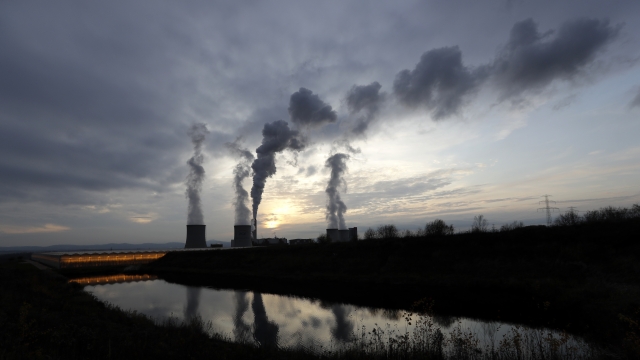 Coal was the focus at the COP26 climate summit Thursday.

More than 40 countries committed to shifting away from the most damaging fossil fuel. But some of the world's biggest coal-dependent countries, including China, did not sign up.

Coal factories predominantly used to power electricity grids produced 37% of the world's electricity in 2019. They are the biggest emitters of carbon dioxide

In the U.K., a country facing increasingly unpredictable weather, climate change is a huge concern for farmers – people like Dean Boam, who believes the British government isn't acting fast enough.

"The biggest concern is climate change and electricity prices," he said. "We're starting to put solar panels on the roofs. But where we live in the national park it's very difficult to get planning permission for anything. We have approached the local authority regarding wind turbine and they don't want it – it's too much visual impact for them."

The U.S. joined 19 other countries by signing a deal to vow to steer their spending into clean energy instead of investing in overseas coal. It's a deal in which two countries - both major burners of coal were conspicuous by their absence.

Inside a conference hall there are stands representing countries like Papua New Guinea and Bangladesh. China emitted 30% of the world's total carbon dioxide pollution last year, and 4% is the increase of dioxide pollution that we've seen from India since 2019. But there is nothing at the summit that represents either of those two nations and the question – the challenge for people at this conference – is how to get China and India to the table.

Brune Poirson is a former French environment minister – turned sustainability expert who says politicians in poorer countries are often voted in to focus on the problems of today and not tomorrow.

"The changes we need to make are huge, we have to make them as fast as fast as we can," he said. "So you have to make sure that technology follows, it does – but not necessarily at a cheap cost and not necessarily for everybody, we are in that transition phase that really makes things difficult. If you're a politician, you also want to get reelected so sometimes you're a bit ambiguous or ambivalent when it comes to the speed of the transition."

There are positive steps in the right direction but also glaring absences from China and other large emitters who have not committed to stop increasing coal use domestically with no progress made on the phasing out of oil and gas.