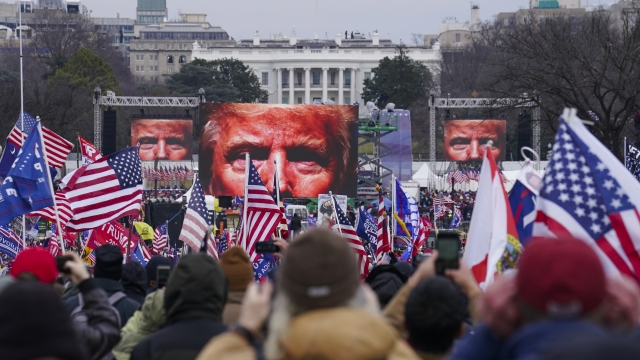 SMS
16 Members Of Trump's Circle Received Subpoenas This Week
By Nathaniel Reed
By Nathaniel Reed
November 11, 2021
It's the latest in the House committee's investigation into the deadly Capitol riot on Jan. 6.
SHOW TRANSCRIPT

The committee charged with investigating the Jan. 6 insurrection at the Capitol issued 16 new subpoenas this week, all to former members of President Trump's circle.

Six received requests for information Monday. The group is made up of mostly members of Trump's re-election campaign, including the campaign manager.

Also subpoenaed: former national security adviser Michael Flynn, who pleaded guilty to lying to the FBI in 2017 but was pardoned by then-President Trump.

On Tuesday, another 10 subpoenas. Nine were sent to former members of the Trump White House, including former press secretary Kayleigh McEnany and senior adviser Stephen Miller.

Committee chair Bennie Thompson wrote: "We need to know precisely what role the former president and his aides played in efforts to stop the counting of the electoral votes and if they were in touch with anyone outside the White House attempting to overturn the outcome of the election."

The Jan. 6 panel is made up of nine members: seven Democrats and two Republicans, all appointed by House Speaker Nancy Pelosi. Both Republicans, Adam Kinzinger and Liz Cheney, are frequent critics of President Trump.

"Millions of Americans have been tragically misled by former President Trump, who continues — to this day — to use language that he knows provoked violence on January 6," Cheney said.

The January 6 committee is leading a busy fall — leading an effort to hold Stephen Bannon, who is a former White House chief strategist under President Trump, in contempt of Congress — a charge that now rests with the Department of Justice to adjudicate.

And another big development this week in the committee's battle for cooperation: A federal judge late Tuesday rejected former President Trump's attempts to stop the release of White House records sought by the panel, ruling the former president does not have a claim to executive privilege. Attorneys for President Trump have appealed that ruling.