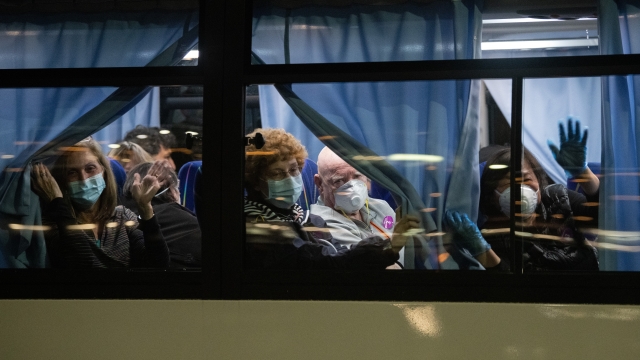 Americans evacuated from a cruise ship docked in Japan are now back on U.S. soil.

The evacuees were some of the thousands who had been quarantined on board the Diamond Princess cruise ship since Feb. 3, amid a coronavirus outbreak that sickened at least 454 passengers and crew members. It's the largest outbreak of the illness outside of mainland China.

Japanese health officials have been conducting health screenings and all of the Americans who chose to fly home were deemed fit to travel before they boarded the planes, according to the U.S. Departments of State and Health and Human Services.

Tests for 14 of the passengers came back positive for the coronavirus — also known as COVID-19 — during the evacuation process. Those individuals were ultimately allowed to fly home. But they were put in isolated sections of the planes away from everyone else.

These 14 cases are on top of the 40 Americans who were previously diagnosed onboard the cruise ship. Those U.S. citizens are currently being treated in Japanese hospitals.

The American passengers who chose to go back to the U.S. are now undergoing a mandatory 14-day quarantine at the military bases.

Other countries, like Canada, Italy and Australia, plan to similarly evacuate their citizens from the cruise ship.