13.8 Million Viewers Tuned In For Day One Of Impeachment Inquiry 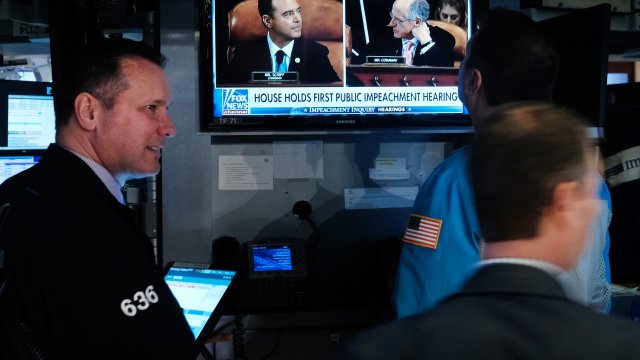 Viewership fell short in comparison to other recent political hearings.

An estimated 13.8 million people tuned in to watch day one of the public hearings in the impeachment inquiry of President Trump, according to Nielsen Media Research.

The ratings, released Thursday, drew from 10 broadcast and cable television networks over the course of six hours. According to Nielsen, a majority of the viewers, an estimated 10.6 million, were 55 or older.

However, in comparison to other recent televised hearings, day one of the impeachment inquiry fell short.

For the September 2018 Senate hearings on U.S. Supreme Court nominee Brett Kavanaugh, about 20.4 million viewers tuned it. In June 2017, an estimated 19.5 million tuned in when former FBI Director James Comey testified to the Senate Intelligence Committee.

In comparison to prior impeachment inquiries, this one still fell short as well. According to The Wall Street Journal, about 22.5 million viewers tuned in to watch President Clinton’s videotaped testimony before a grand jury in September 1998.

Public hearings in the impeachment inquiry continued Friday, and more individuals are scheduled to testify next week.