12 Syrians' Homes Were Bombed, So The Pope Moved The Refugees To Rome 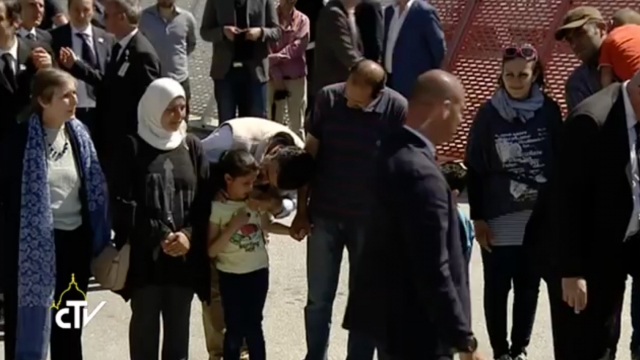 SMS
12 Syrians' Homes Were Bombed, So The Pope Moved The Refugees To Rome
By Melissa Prax
By Melissa Prax
April 16, 2016
Pope Francis visited the Greek island of Lesbos on Saturday and took three Syrian refugee families back to Rome.
SHOW TRANSCRIPT

After Pope Francis' visit to Greece on Saturday, the pontiff took three Syrian refugee families back to Rome where the Vatican will take care of them.

The Pope said, "We must never forget, however, that migrants, rather than simply being a statistic, are first of all persons who have faces, names and individual stories."

The Vatican said the 12 refugees are Muslim and that the move was carried out through talks with officials from Italy, Greece and the Vatican.

The pope's six-hour visit was on the Greek island of Lesbos — a main passageway for refugees trying to get to Europe. The International Rescue Committee estimates 4,000 refugees are on the island.

The organization said: "These refugees were randomly selected and are the very few lucky ones. For the tens of thousands that remain in Greece, their life in limbo continues."

The pope has visited islands that house refugee and migrant camps before. ln 2013, Francis visited a small Italian island that was a main entry port for African refugees to get to Europe.

This video includes clips from the Vatican and United Nations.