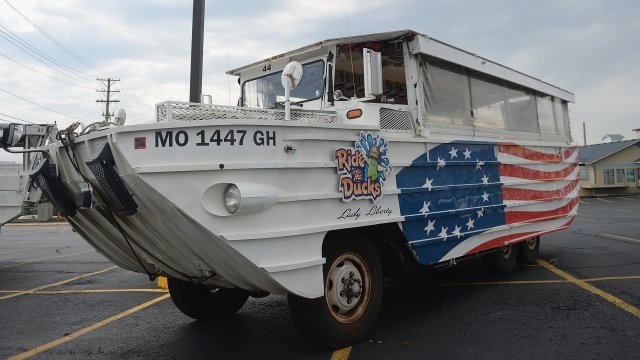 SMS
Operators Of Duck Boat Company Sued For $100M
By Katherine Biek
By Katherine Biek
July 30, 2018
The wrongful death lawsuit was filed Sunday on behalf of two people who died in the July 19 incident in Branson, Missouri.
SHOW TRANSCRIPT

A federal lawsuit is seeking $100 million in damages from the owners and operators of a duck boat that sank in Branson, Missouri.

The suit accuses Ripley Entertainment Inc. and others of intentionally taking the vessel out on the water despite knowing severe weather was in the forecast.

The wrongful death lawsuit was filed Sunday on behalf of the estates of two members of an Indiana family killed in the July 19 incident. Seventeen people died when the boat sank — nine of them belonging to that family.

The plaintiffs accused Ripley Entertainment, which owns Ride the Ducks Branson, and others of ignoring previous warnings about design flaws that made their vessels "more susceptible to sinking."

Ripley Entertainment refused to comment since the incident is still under investigation.

As of Monday morning, the National Transportation Safety Board had yet to officially announce what caused the accident.