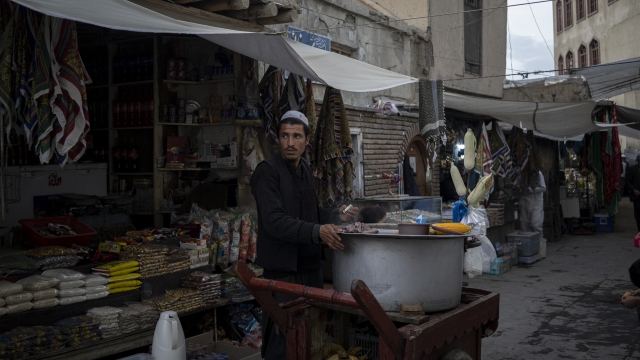 SMS
Despite Taliban Promises, Situation Still Dire In Afghanistan
By Terace Garnier
By Terace Garnier
November 24, 2021
The Taliban, who call themselves a more moderate version of their predecessors, have not kept their promise to protect all Afghans.

It has been 100 days since the Taliban took control of Afghanistan, and what we are seeing now isn't quite what they promised.

The Taliban, who call themselves a more moderate version of their predecessors, have not kept their promise to protect all Afghans.

"I ask (the donors) to help the hospitals and pay their salaries," said Bibi Anisa, an aid recipient.

The nation has not been able to receive international aid, which has led many families to resort to any means necessary for survival, including some who reportedly have sold their children.

More than $200 million in humanitarian aid a month is needed to avoid a disaster, according to the United Nations.

"I ask them (the donors) to increase the amount of the aid in future. It will be much better for the people and will enable us to buy at least fuel for heating of our families in the coming cold season," said Safiullah Khan, an aid recipient.

But the new rulers are allowing Shiites to perform their religious ceremonies — a freedom their predecessors would not have permitted. In recent months Taliban soldiers have been spotted protecting worshippers outside Shiite shrines, and they are still waging war against ISIS' Afghanistan affiliate, ISIS-K. Recently they sent hundreds to fight in Nangarhar province. This comes after ISIS began attacking Jalalabad weeks after the Taliban takeover. Local Taliban commanders responded to this by killing and hanging the bodies of accused collaborators along main roads and busy intersections.

Earlier this month a U.S. Special representative for Afghanistan expressed concerns that there will be an uptick in attacks by ISIS-K. After briefing NATO allies on U.S. talks with the Taliban, U.S. Special Representative for Afghanistan Tom West told reporters: "The Taliban have voiced very clearly and openly their desire to normalize relations with the international community, to see a resumption in aid, to see a return of the international diplomatic community to Kabul and to see sanctions relief. The United States can deliver none of these things on our own."

It is a very dire situation in Afghanistan as many are still trying to flee. And for those who are unable to, they are fighting to survive a new war and attacks from Taliban or ISIS-K soldiers.