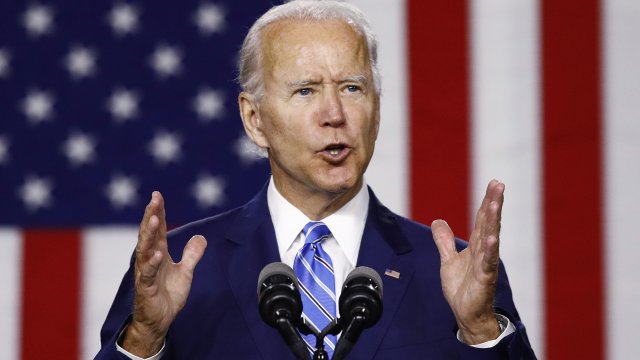 With just over three months until Americans pick the next president, former Vice President Joe Biden, the presumptive Democratic nominee, is sitting in a comfortable position.

National polling of registered voters has Biden up by 8, by 11, even up by as much as 15 points. Most battleground state polling also shows Biden ahead. A Pennsylvania poll released July 22 has the Democrat up by 5, and one released the same day from Ohio has Biden up by 4. Biden is leading in other swing states like Arizona, North Carolina, Florida, Michigan and Wisconsin, all of which President Trump won four years ago. But those state polls are a cautionary tale.

Surveys taken around this time in 2016 had Hillary Clinton ahead in virtually every swing state. She was ahead nationally, too, though those polls did prove accurate since she won the popular vote by more than 3 million votes.

Democrats largely rallied around Biden after he became the presumptive presidential nominee four months ago. It has helped lead to a dramatic fundraising boost. Until the field winnowed in March, Biden hadn't raised more than $100 million, while President Trump had been raising well over that for nearly a year.

The fundraising gap is closing slowly, with Biden raising $63 million in June to Trump's $55 million. But most other fundraising numbers continue to show Biden trailing the president. Overall, Biden has raised about a half of what President Trump has, and the Democratic National Committee raised one-third of what the Republican National Committee did in June.

Still, the campaign is using its cash on hand to blanket swing states, spending $15 million on advertising in the last week of July alone in the key states President Trump won in 2016. As the sprint to the finish line nears and COVID shows no sign of slowing up, the campaign is laser focused on framing the vice president as a trusted leader who can guide the country out of the pandemic and economic crisis.

But getting people to the polls is a top concern for Democrats. The campaign, already facing an enthusiasm gap compared to Trump supporters, must work double time to connect Biden, who is known for retail politics, with voters through the still largely virtual campaign.

They've also been holding virtual roundtables with surrogates, possible VP picks and President Obama to spread the message. The campaign says it saw a three-fold increase in email sign-ups ahead of a conversation between Biden and his former boss. Still, the campaign says it can't get complacent and rely on poll numbers. After all, only three incumbent presidents have lost reelection in the last century, and November is still a ways away.