As Winter Begins, $1,000 Fine For Giving Supplies To DAPL Activists 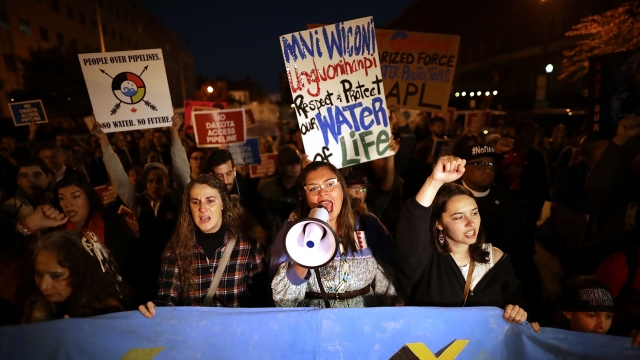 SMS
As Winter Begins, $1,000 Fine For Giving Supplies To DAPL Activists
By Katherine Biek
By Katherine Biek
November 30, 2016
It's the latest attempt by the state government to force activists to leave.
SHOW TRANSCRIPT

Anyone delivering supplies to people protesting the Dakota Access Pipeline in North Dakota could now face a $1,000 fine.

It's part of a plan by the state government to try to force out the activists currently camping out on federal land.

Last week, the U.S. Army Corps of Engineers said activists had to vacate the land by Dec. 5 or face arrest.

Officials later said they had "no plans for forcible removal" and said any activists who wanted to stay could, but anyone staying would be unauthorized.

"But those who choose to stay do so at their own risk as emergency, fire, medical and law enforcement response cannot be adequately provided in these areas," the U.S. Army Corps of Engineers statement read in part.

And now, North Dakota Gov. Jack Dalrymple is ordering an emergency evacuation of the area because of harsh winter weather.

And those cold conditions have already started. The Bismarck Tribune reported about 8 inches of snow had fallen across a large portion of the state.

So delivering supplies to activists is seen as a violation of that emergency evacuation order and that's where the $1,000 fine comes in.

A spokeswoman for the local sheriff's department said enforcement of the governor's order will be "passive in nature" and no roadblock will be set up.

Activists and members of the Standing Rock Sioux Tribe are protesting the construction of the pipeline because they say it could pollute nearby drinking water.

And despite the evacuation order, the chairman of the Standing Rock Sioux Tribe told CNN the activists plan to stay.