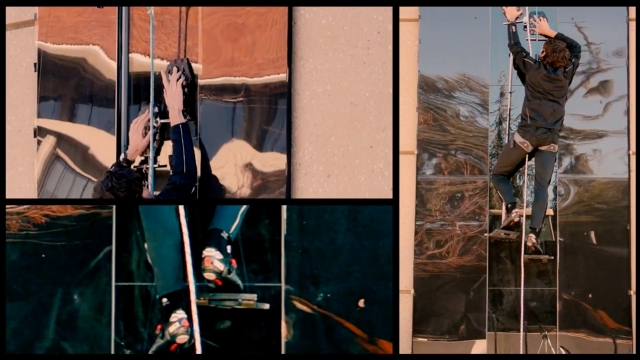 SMS
Zoologists Who Said Spider-Man Can't Climb Walls Were Wrong
By Leah Becerra
By Leah Becerra
January 28, 2016
Leave it to crafty engineers to create a contraption that can give a mere human spider-like abilities.
SHOW TRANSCRIPT

Earlier this month, researchers at the University of Cambridge's Department of Zoology broke our hearts. They basically said that Spider-Man — yes, the fictional character — couldn't possibly be real. (Video via Marvel Enterprises)

Obviously, he's isn't a real person. But the researchers published a paper saying due to Peter Parker's size, he's not plausible as a wall-climber, like a gecko. The group blamed the web-slinger's feet because unlike the gecko, they wouldn't be large enough to support the weight of his body while scaling walls. (Video via Columbia Pictures)

"But no wall-climbing? That's one of the main things that Spider-Man does. Without that, he just shoots goo and is radioactively guilty about his uncle," said Stephen Colbert on "The Late Show." (Video via CBS)

Exactly! So, engineers from Stanford University set the record straight this week.

"Now here at Stanford, we had an issue with that because if you don't just copy the gecko, but instead you're clever about how you distribute your weight, you can use a device like this. And a human can climb a glass wall," a Stanford engineer said.

This is actually a kind of re-introduction of Stanford's gecko-inspired adhesive pads. The technology debuted in November 2014.

At the time, Stanford news wrote, "The engineers have shown that the special springs in their device make it possible to maintain the same adhesive strength at all sizes from a square millimeter to the size of a human hand."

So, I guess what I'm saying is this: Cambridge, don't mess with Spider-Man ... or, apparently, Stanford.