Zookeeper Dies After Being Injured By A Tiger 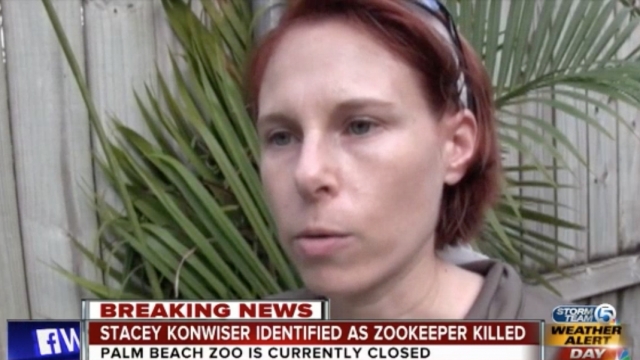 SMS
Zookeeper Dies After Being Injured By A Tiger

By Samantha Crook
April 15, 2016
Zoo guests were never in any danger because the animal never escaped. But there was some frenzy in response to lockdown procedures after the incident.
SHOW TRANSCRIPT

A Florida zookeeper died after being injured by a tiger.

"She cared greatly for tigers. I kind of referred to her as a tiger whisperer. ... They spoke to each other in a language only they could understand," a zoo spokesperson said at a press conference.

Newsy's partners at WPTV say details of what happened behind the scenes while the trainer was interacting with the tiger are still under investigation.

The Palm Beach Zoo said the male Malay tiger was tranquilized shortly after, and zoo guests were never in any danger because the animal never escaped. But there was some frenzy in response to lockdown procedures after the incident.

"We were on a train ride in the zoo and the guy got radioed and said there was a tiger loose, and he was obviously worried. ... Next thing we know, we're getting rushed into the gift shop," a zoo visitor told WPTV.

A zoo spokesperson said the proper safety checks had taken place before the incident and that this was the first time a human died because of an incident with an animal at the zoo.

This video includes a clip from Palm Beach Zoo.