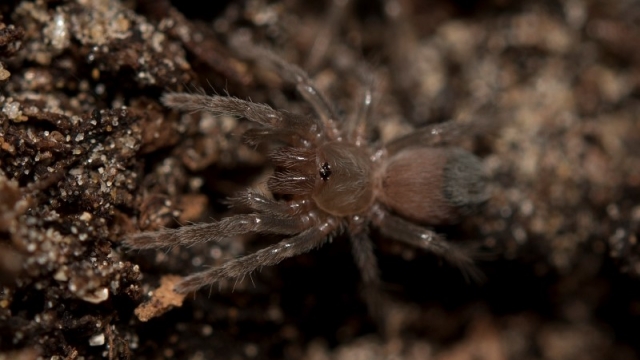 SMS
An English Zoo Says It Is The First To Breed This Rare Type Of Spider
By Ryan Biek
By Ryan Biek
August 15, 2016
Roughly 200 Montserrat tarantulas recently hatched at the Chester Zoo in England.
SHOW TRANSCRIPT

A zoo in England says it's the first to successfully breed an extremely rare and mysterious species of spider.

Aside from the fact that their native home is an island in the Caribbean, little was known about the tarantulas before researchers at the zoo began studying a small group of them three years ago.

SEE MORE: Scientists Created A Wire That Acts Like A Spider's Web

One challenge for the researchers was the difference in lifespans. Males live two and a half years, at the most, while the females live much longer. Because of this, scientists worry males will die off before females reach sexual maturity.

That is assuming the females even accept the males' advances. One of the scientists told the BBC the females can choose to kill the males instead of mating with them.

Ultimately, three females did choose partners, and then they disappeared. The BBC reports  three apparently impregnated females buried themselves underground for months, leaving the scientists wondering what happened to them.

Eventually, about 200 spiderlings rose from the ground, all coming from one female.

The zoo says this was the first successful breeding of the threatened Montserrat tarantulas. And it added that techniques the scientists learned in this process will be applied to breed other threatened species.

Conserving Montserrat tarantulas could also help species that prey on them, like the mountain chicken frog, which is endangered.