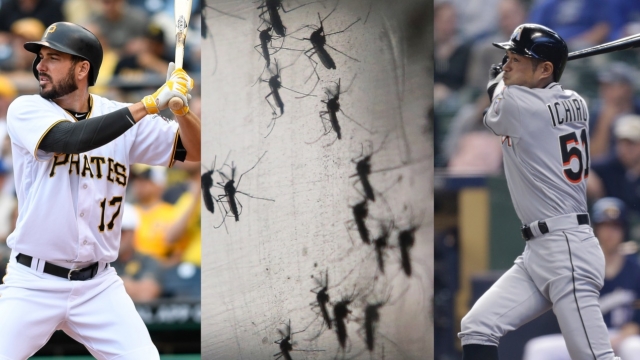 SMS
Zika Virus Fears In Puerto Rico Force MLB To Move Games Back To US
By Eugene Daniels
By Eugene Daniels
May 6, 2016
Players from the Pittsburgh Pirates and the Miami Marlins raised concerns with the league after learning more about Zika from the CDC.
SHOW TRANSCRIPT

If you were expecting to watch the Pittsburgh Pirates take on the Miami Marlins on neutral territory in Puerto Rico, you're about to be very, very disappointed.

Major League Baseball announced Friday the two games scheduled for the end of May were relocated because of the Zika virus. The Centers for Disease Control and Prevention has found more than 600 cases of the virus in Puerto Rico.

The league released a statement that said the "MLB and the Players Association did everything possible to adequately address the concerns raised by players and still play the games in Puerto Rico, but despite extensive efforts, they were unable to develop a workable solution."

After the CDC spoke with the teams, players from both clubs said they were worried about getting the virus and then passing it to their partners.

Zika is passed on to humans from mosquitoes, and the CDC has determined Zika can be sexually transmitted, regardless of whether or not a man shows symptoms. The virus is also linked to microcephaly and other brain defects in children born to mothers who have contracted the virus.

Instead of the games, the MLB will hold different community events in Puerto Rico to make up for the games. Both the MLB and the Player's Association will also donate to help get rid of the virus in the territory.