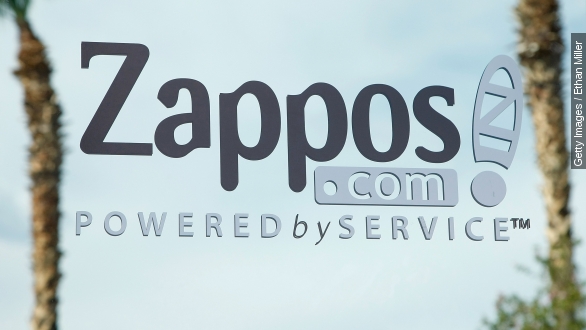 SMS
Zappos Takes Final Steps Toward Bossless Workplace
By Jasmine Bailey
By Jasmine Bailey
April 16, 2015
In two weeks, Zappos will completely implement a holacracy system in which employees are basically their own bosses.
SHOW TRANSCRIPT

When it comes to the workforce, a lot of us are used to the traditional hierarchy — where people are ranked above one another by level of importance or authority.

But some companies across the county, like online shoe store Zappos, are trying a new system — one where employees are in essence their own bosses. It's called a holacracy.

"It replaces conventional command-and-control workplaces with a series of self-governed teams. The effort is meant to foster faster decision-making and innovation."

The company seems to be so committed to making the change, CEO Tony Hsieh has told employees if they don't want to be part of the holacracy, they can ​quit and receive three months severance pay.

KNPR talked to the founder of the system, Bryan Robertson, who further explained the positives. He said, "Under the system employees get clear roles, clear expectations and clear autonomy. There are governance meetings where roles and the people in them are discussed, changed and challenged."

There is little bit of a management role, though, as one person in the group oversees other members to make sure everyone is meeting goals, but that person does not have the power to fire people or tell individuals how to do their jobs.

When it comes to Zappos, some people have decided to opt out of the new system and take the severance package — an option Robertson says is generous but explains why the transition could be difficult.

"That can cause some consternation, especially for people who are used to being managers. They're used to kind of getting their self esteem met by how many people are in their charge. ... It's much more like working together."

Zappos said it will completely transition to a holacracy by the end of April.