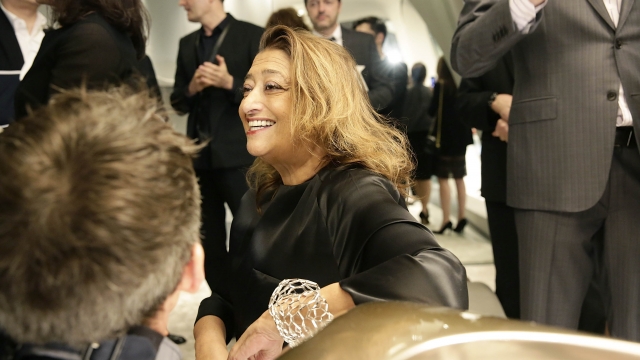 According to her firm, Hadid died from a heart attack in Miami while being treated for bronchitis.

"There are so many terrains and territories in architecture that have yet to be explored," Hadid said.

Hadid was the mastermind behind incredible structures like the London Aquatics Centre, which was designed for the 2012 Summer Olympics; the Nordpark Railway Stations in Innsbruck, Austria; and the Vitra Fire Station in Weil am Rhein, Germany.

The Design Museum in London described Hadid's architecture as having "multiple perspective points and fragmented geometry to evoke the chaos of modern life."

Hadid was the first woman to receive the Pritzker Architecture Prize, the industry's highest honor, in 2004. It was an honor she thought was overdue.

"I find it difficult that it had taken so long for a woman to receive an award like that. ... Of course there were other women who won it, but they were partnered with a male so they weren't considered in the same way," Hadid said.

In a 2013 profile, Hadid had this to say about her profession and why she chose architecture.

"We do this really so we can be in a very simple space like this and feel good. And it's as simple as that," Hadid said.

This video includes clips from Zaha Hadid Architects, The Oxford Union and BBC and images from Andreas Schwarzkopf / CC BY SA 3.0 and Getty Images.