Your Right To Leave Bad Reviews Is Being Debated In Congress 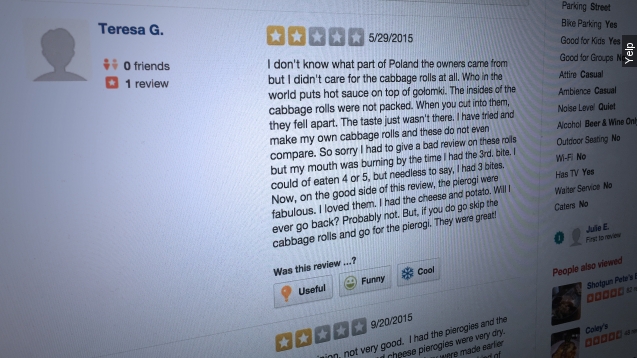 SMS
Your Right To Leave Bad Reviews Is Being Debated In Congress
By Mikah Sargent
By Mikah Sargent
November 7, 2015
Congress is currently reviewing a bill that would make nondisparagement clauses void in consumer review cases.
SHOW TRANSCRIPT

These days, buying a product, booking a hotel or requesting a service online typically involve a bit of research — you read what others have to say about whatever it is you're about to spend money on.

"After reading all the reviews, I know I'm making the right choice," said Dawn R. in an Angie's List commercial.

If you see loads of bad reviews, chances are you're not going to spend your money on that product or service. And that's why some companies have taken to introducing nondisparagement clauses, essentially forcing customers into agreeing to not leave bad reviews or they'll face consequences.

Schatz along with a number of other lawmakers have introduced a bill to Congress called the Consumer Review Freedom Act that renders any nondisparagement clause void in consumer review cases.

Unsurprisingly, Yelp — a consumer review site — spoke out in support of the bill, "We at Yelp applaud the Senate ... for their dedication to this issue and look forward to a long future where people can share their firsthand experiences with local businesses without facing the threat of fine or unfair retribution." (Video via Yelp)

The Consumer Review Freedom Act has been referred to the Senate Committee on Commerce, Science, and Transportation. According to Washington Business Journal, the bill has support from both parties and will likely be approved by the committee.