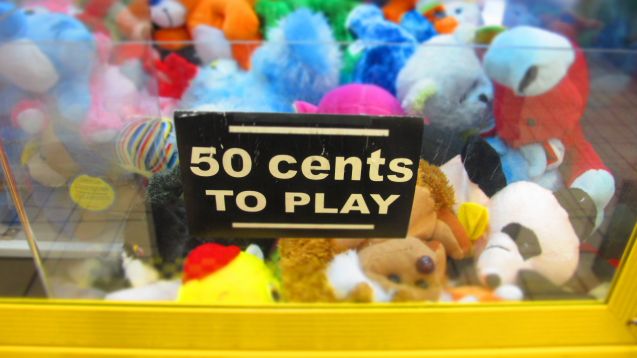 SMS
Your Parents Weren't Wrong: Claw Machines Are Rigged
By Katie Link
By Katie Link
August 31, 2015
Claw machines are rigged. Try as you might, the game always favors the house.
SHOW TRANSCRIPT

Surprise! Claw machines are rigged. Okay, no one's really shocked, are they?

And yet, people keep trying to get those little plush toys.

Here's the secret. There's a thing called "claw strength" that's working against you and your wallet.

Vox writer Phil Edwards pulled instruction manuals for different makes and models of claw machines, and it turns out it comes down to this: money.

"Simply input the coin value, the average value of the merchandise and the profit level. The machine will automatically calculate when to send full strength to the claw," Vox reports.

So the machine decides how strong to make the grip of the claw based on its ability to make a profit. Oh, and it can also be programmed to make you think you almost won.

Association magazine Vending Times responded to the article Vox published. According to that article, most industry leaders in the amusement market self-regulate according to the law. The publication says the only problem is that in most states, the laws are unclear.

But if you're down to lose some money to try to prove us wrong, by all means, be our guest.