Your Next Pair Of Adidas Could Be Made By Robots 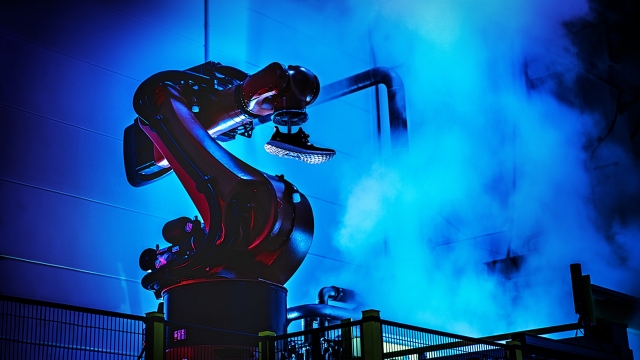 SMS
Your Next Pair Of Adidas Could Be Made By Robots
By Katherine Biek
By Katherine Biek
May 25, 2016
The first 500 pairs of shoes produced in Adidas' Speedfactory facility will hit stores this year.
SHOW TRANSCRIPT

Come the end of 2016, the new Adidas shoes on your feet may have been made by a robot.

Late last year, the sportswear giant announced it was testing a new manufacturing process in Germany that involved the use of "intelligent robotic technology" instead of people.

Clearly, the pilot program went well, because Adidas will start large-scale production in Germany after it finishes building its production plant and even plans to open a second Speedfactory facility in the U.S. next year.

Adidas currently manufactures around 300 million shoes a year, the majority of which are produced by hand in Asia, according to NBC.

Company management says the goal of these new Speedfactory facilities isn't to replace workers, but instead to get products out to stores faster.

Adidas' senior director of corporate communications told Fortune: "The current model in our industry is very much based on us sourcing products from countries where our consumers are typically not based. By the time the consumer gets the products, the actual order placed by the retail partner was many months ago."

The move could help Adidas reach its goal of a 15-percent increase in net income each year until 2020.

Adidas, which has partnered with several big names like Kanye West and Stella McCartney, also plans to open 3,000 new stores in China over the next four years and sign endorsement deals with as many as 500 professional athletes.

But Adidas may soon have competition when it comes to its robot assembly line — Nike is reportedly looking at creating a similar production process.

This video includes clips from Adidas and Nike and images from Getty Images and Adidas.