Your Next Guinness Might Come With A Nutrition Label 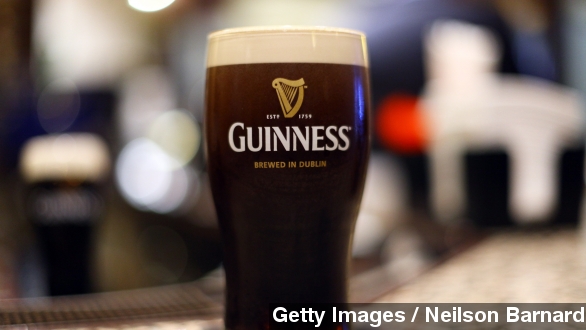 SMS
Your Next Guinness Might Come With A Nutrition Label
By Jake Godin
By Jake Godin
March 20, 2015
Diageo, the company that owns alcohol brands including Guinness and Johnnie Walker, has announced it will start including nutrition labels on bottles.
SHOW TRANSCRIPT

"It might surprise you to know that a 12-ounce serving of Guinness has only 124 calories. A great way to go lighter is to go darker," says a Guinness commercial.

Be surprised no more, Guinness drinkers! Diageo, the company that owns Guinness as well as Johnnie Walker, Ketel One, Baileys and a host of other beers, wines and spirits, will put nutrition labels on its beverages.

So next time you pick up some, say, Smirnoff at the store, you might see one of these on the bottle.

Diageo touts the voluntary move as "a first done by any alcohol company." (Video via Guinness)

The reason for the change, Diageo's CEO Ivan Menezes says, is to "help reduce the misuse of alcohol — a goal shared by regulators, consumer organizations, health professionals and alcohol companies alike." (Video via Bloomberg)

Diageo has already received approval from the Alcohol and Tobacco Tax and Trade Bureau in the U.S., which The Wall Street Journal says means the labels will likely start appearing in the next few months.

Europe might take a bit longer for approval. Diageo says it wants to label its drinks with per-serving information, but European Union regulations require distributors to label per 100mL. That, according to Diageo, is misleading.

There's also the fact the E.U. covers 28 member states, so it could take some time to establish a standard throughout all of them.

But this wouldn't be the first push for nutritional information on booze in the E.U. Last October, the London-based Royal Society for Public Health called for just that.

The European Commission ruled on new food regulations within the E.U. in December of last year but did not require mandatory nutritional information on alcoholic beverages.